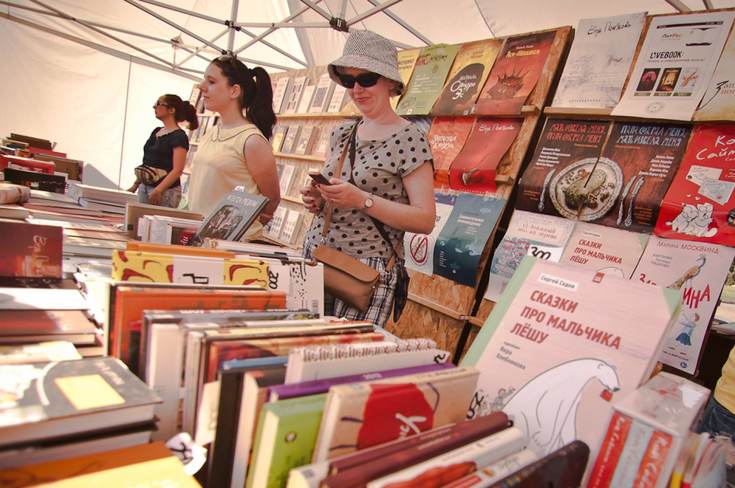 Book fair is working from 5 till 7 June

The children program is running during these days

The fourth Platonov Festival Book Fair presents a wide range of editions by over 100 independent publishing houses. Among them there are regular participants of the fair as well as new ones, those who have applied for participation for the first time this year (“Art-Volkhonka”, “BooksMart” and others).

The fair features books by publishers from Moscow (“O.G.I.”, “Livebook”, “NLO”, “Galart”, “Art-Ttranzit”, “Ad Marginem”, and others) and Saint-Petersburg (“Aletheia”,”Polyandria”, Publishing House “Hyperion”, Ivan Limbakh’s Publishing House, “Komilfo” and others. Traditionally, such publisher from Voronezh as “The Centre of Spiritual Revival of Black Soil Region” and “E.A. Bolkhovitinov Publishing House”.

There are also books by publishers from the CIS countries, namely Ukraine (“Osvita”, “Ababagalamaga”, “Optimus”) and Belarus (“Belarusian Science”, “Belarusian Encyclopedia” and “Popuri”), printed in Russian.

One can also find foreign language editions offered by a partner of the festival – a language school International House Voronezh – Linguist. These are books by such publishers as Cambridge University Press, MacMillan, Pearson.

Children’s books by such publishers as “Samokat”, “KompasGid”, “Pink Giraffe”, “Rare Bird”, “A Walk Through History”, “Serafim-Sofia” and others enjoy unfailing popularity among the visitors.

On the final day of the Book fair the publisher representatives will hold a Round Table discussion of the publishing issues in Russia. The event will take place in the art centre “Commune”.

The master-class teaches how to design models of architectural monuments – masterpieces of wooden and stone architecture of different countries and epochs, - as well as replicas of historical and modern railway engineering.

For children aged 6 and above.

Under the supervision of experienced teachers, children not only learn to make beautiful objects from different materials, but also practise speaking English.

The master-class teaches how to design models of architectural monuments – masterpieces of wooden and stone architecture of different countries and epochs, - as well as replicas of historical and modern railway engineering.

For children aged 6 and above.

“Create Your Own Book” Master-Class

An engaging creative activity for children, which uncovers the mysteries of printing and demonstrates all the stages of creating one’s own original book, beginning with the choice of a format, materials the book will be made of, text and picture layout, the cover, publisher’s imprint and ending with the presentation of one’s own book.

For children aged 5 and above.

“Secrets and Mysteries of Puppet Theatre”

The master-class familiarizes children with the basics of acting and shows how a puppet comes to life.  The participants can try their hand at puppeteering and act out a mini-play “House That Jack Built”. Finally, graduates and students of the theatre-studio “Kuklomania” (“Puppet Mania”) show a performance “Yablochko” (“Little Apple”).

The participants will see the prototypes of the old folk musical instruments (such as treschyotka, kalyuka, gusli, gudok, rozhok, zhaleyka and others), find out how they all work and listen to interesting stories of the old music world. The children will also be able to play these instruments.

The participants of the class, which will be conducted in English, will learn physics and chemistry in practice, doing spectacular experiments and getting to know more about the way of the world.

Olya Aprelskaya (Moscow) is a fairy-tale writer, author of poems and songs, puppeteer, developing games master. She follows the tradition of folk narration in shape of folk narration review-night; she conducts workshops on human creativity in ancient crafts and beliefs of the world’s nations: using a spinning wheel, traditions of the Russian obereg (protective amulet) dolls, Indian mandalas, and sets up developing game-tales.

For children (aged 6 and above) and adults.

“Mad Professor Nikolai’s Show” is a series of interactive academic show-programs in physics and chemistry, where every child participates in all kinds of experiments. The shows are based on the principle of “edutainment”, that is “educate in an entertaining way”.

For children aged 5 and above.

“Live Tales” story-telling is a circle of live narration, the revival of its traditions. Adults and children get together in a circle and tell each other fairy-tales, myths and legends, anecdotes from their own or their friends’ lives.

For children (aged 12 and above) and adults.

In collaboration with the Alliance of Independent Russian Publishers and Booksellers

Book fair is working from 5 till 7 June

The children program is running during these days