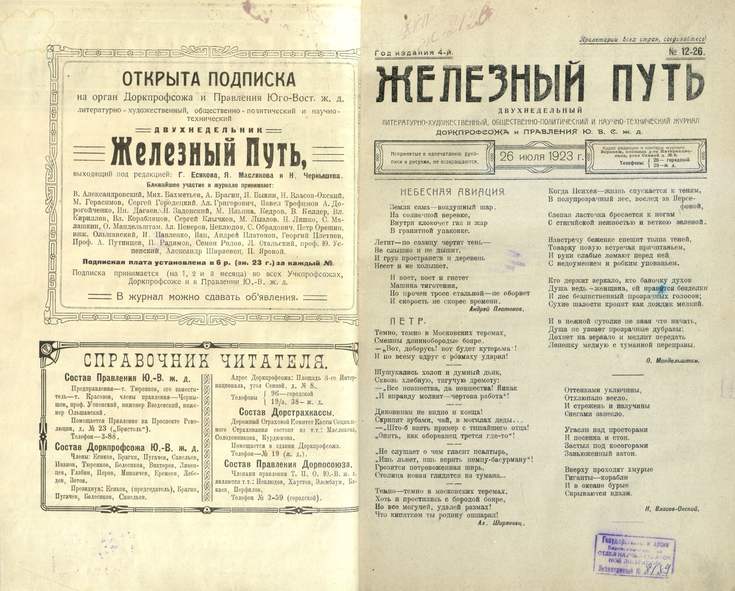 "Sheer Enthusiasm of Life" (from Andrey Patonov's Diaries) is an exhibition of Andrey Platonov’s publications in Voronezh periodicals from 1918 to 1925. He is the author of about 300 texts in "Voronezhskaya Kommuna" ("Voronezh Commune"), "Krasnaya Derevnya" ("Red Village"), "Nasha Gazeta" ("Our Newspaper"), "Trudovoy Klich"("Labour Call"), "Repeynik" ("Bur"), "Ogni" ("The Lights") newspapers and "Zhelezny Put" ("The Iron Way") magazine.

The exhibition "Sheer Enthusiasm of Life", which shares the display room with the photo exhibition "Fear, Bread and Faith", gives the audience a chance to look at Platonov's contemporaries, read about what made them anxious, concerned and happy, to recreate the life of the city and the country in the early XX century.

"A newspaper is a means of expression of everyday thoughts and reflections of a human society. A newspaper is the consciousness of the society and its instrument for struggle for improvement"

Andrey Platonov, from the article "A Newspaper and its meaning"

"A newspaper should be not only a constant professional meeting of proletariat, but also the cinematography of life"

Andrey Platonov, from the article "A Picturesque Newspaper"