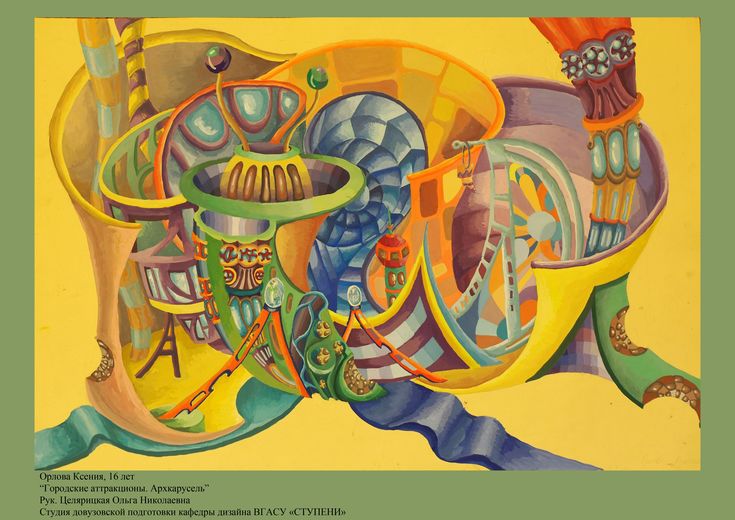 “The impossible is a borderline between our world and the other beyond”, – wrote Andrey Platonov in his letter to his wife in autumn 1922.

Inside each person there is the private unique universe. Children’s universes are great, they are closer to the Impossible than anyone else: in their fantasy they can see what many adults are blind to and they can make an artistic reconstruction of reality through the prism of their inner world.

Specially for the Platonov Festival the students of the studio “Stupeni” have created drawings, models and lettering designs.Over 60 works will be presented at the eхposition - new worlds, imaginary universes, childhood dreams and emotions, inanimate objects ignited with spirit and new thought forms.

Children’s studio of artistic and architectural development and pre-tertiary preparation “Stupeni” was opened by Voronezh SUACE (State University of Architecture and Civil Engineering) design faculty in 2003.More than 200 children aged between 7 and 16 are participants of the studio. The classes are given by 13 teachers including the tutors of the design faculty, professional architects and designers, graduates of the studio “Stupeni” and graduates of the faculty of architecture of Voronezh SUACE.

The studio has taken part in the IV Platonov Arts Festival, where they worked on the exhibition “Daniil Kharms. Things and Things that happened”.

“Stupeni” are multiple award winners of the Russian children’s artistic and architectural competition named after V.E. Tatlin, the International Architectural Festival “Zodchestvo” (“Architecture”), the competition of young designers of Russia “SOCHI-ART-MOST 2010” and other festivals and competitions.

Tatiana Panicheva, a curator of the exhibition is the leader of the studio “Stupeni”, teacher, associate professor at Voronezh SUACE and honorary worker of general education.