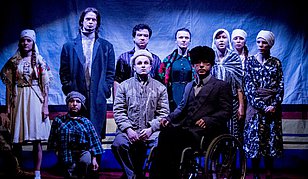 «Theatre of equals» is a unique cultural project, which unites ordinary young people as well as men and women with disabilities. The troupe consists of 26 artists, half of whom are blind, wheelchair invalids, ISP and dampened growth suffering, with mental retardation and hardness of hearing people.

The theatre was formed in 2014, and in June 2014 its debut performance “A cat on the roof” was presented to the audience. The artistic director of the “Theatre of equals” is Vadim Krivosheev – the well-known Voronezh actor and theatre director.

By its concept the theatre is unique not only for Black Earth region and Russia, but for the whole world as well. The Governor of Voronezh Region Alexey Gordeev supports the theatre.

«Emptiness of Soul» is the second performance of the “Theatre of equals”. It is a combination of Andrey Platonov’s novels “Fro”, “Emptiness of Soul”, «Yushka» and is about living through the hardship Soviet era and eternal suffering of the soul.

«Emptiness of Soul» is the search for light and goodness, for the inner self, discovery of harmony in the Russian controversial life. Vadim Krivosheev explains that the stories he has chosen for this performance explain and illustrate the main ideas of the most Platonov’s writings –people’s anger, longing for the best future, pains of war.

The premiere was held in March 2015 in Voronezh by today the performance and will be presented at the Munich Arts Festival «Rampenlichter».