Beyond the memory.In the memory of the greatPaco de Lucía 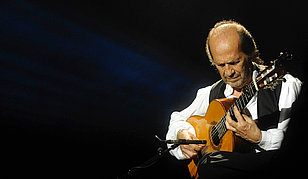 Paco de Lucía (1947 – 2014) was a legendary Spanish virtuoso flamenco guitarist, creator of the New Flamenco style, composer and producer. De Lucía was widely considered to be the world's premier flamenco guitarist and by many to be Spain's greatest musical export. He has had a revolutionary influence on flamenco music both as a composer and otherwise. Among his numerous awards and titles - the Prince of Asturias Awards in Arts (2004), an honorary doctorate of the world-famous Berklee College of Music in Boston (2010), Latin Grammy Awards and others. Paco de Lucía during his prolific career collaborated with such masters of instrumental music as Chick Corea, John McLaughlin, Al Di Meola and Larry Coryell.His contribution to the music of 20 century one can hardly overestimate.


«Beyond the Memory» - a tribute concert in memory of the late Paco de Lucia is dedicated to his music out of more than four decades. However, it goes beyond. Music is never static, but changes and develops into the future. Once a note has been played it is history, but an original musical idea leaves footprints in our
souls and hearts. That led us to new dimensions.

Paco de Lucia has left a field of musical seeds that has influenced musicians worldwide. The concert takes you through his musical life with the most beautiful songs like “Entre dos Aguas” , “Zyryab”, “Solo quiero caminar” and many others, performed by the best musicians that accompanied him in the different periods of his musical life.

We will see Joaquin Grilo dance to his music. Carles Benavent and Jorge Pardo, from the former sextet, who developed – together with Paco de Lucia – the music that we today recognize as Flamenco. David de Jacoba, considered the new Cameron de la Isla will be singing with his unique voice. Together with the musical performance we will show unseen images as well as parts from the movie “La Busqueda” based on Paco de Lucia’s life, made by his son Curro.

But as we said before the tribute concert goes beyond the memory. In between the “best of” program we will also be hearing original music from the members of Pacos groups – music that was influenced by the Maestro and will be performed as a bowing and “thank you” to the greatest Flamenco guitarist of all times.

«Beyond the Memory» is planned for 2015-2016.
The premiere of this project in Russia will be held within the 5th International Platonov Arts Festival in Voronezh. After Voronezh the show will be presented at the worldwide renowned Montreux Jazz Festival which will take place in Switzerland for the 49th time! In this year program there are such legends as Kronos Quartet, Chick Corea & Herbie Hancock, George Benson, Santana, Lionel Richie… Among young contemporary artists – Ibeyi, Damien Rice, Sam Smith, George Ezra, James Blake, Alt-J, Die Antwoord and many more...