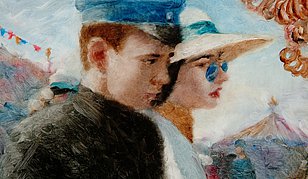 A solo exhibition of Aleksandr Petrov, one of the most famous Russian artists and animators, an Oscar-winner, a laureate of the Platonov Award in Literature and Art and many others, will take place in Voronezh for the first time.

At the exhibition "Aleksandr Petrov. Art in Motion" the audience will have a chance to trace the process of film making: starting with drafts and sketches and ending with complete frames - picturesque scenes, which will be presented in display windows illuminated from beneath. What is more, Petrov’s films will be on show at the Gallery throughout exhibition running time.

The core of the exhibition consists of sketches for two films: "My love", based on the novel by Ivan Shmelyov, and "Cow", based on the story by Andrey Platonov. Besides being multiple festival winners, the films have been nominated for an Oscar.

The technique of animated painting or painting on glass is a unique know-how used by Aleksandr Petrov, who needs a paintbrush only for the finishing touches. He uses slow-drying transparent oil paints, which pass light through the glass layers.

The artist makes a lot of sketches, using a pencil, drawing ink and pastel, creates portraits in colour and only after this he starts work on each frame in detail. 1 second of watching takes 12 paintings, 1 minute involves 720 paintings. One can easily estimate how much effort the artist puts into the whole film. For example, "My love", which lasts for 26 minutes, has taken about 19 thousand paintings.

Aleksandr Petrov will hold a master-class on animated painting in the Theatre Club of the Chamber Theatre on the 6 th of June. In full view of the audience he will reproduce his famous film shots on a special painted-animation stand; the master-class participants will see how and with what materials the animator works.