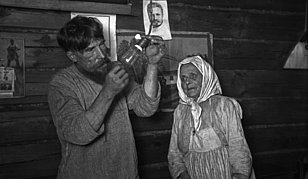 The exposition “Fear, Bread and Faith” (a quote from Andrey Platonov’s diaries) presents the works of Russian chronicle photography of 1920-1930s, which bear resemblance to Platonov’s plots and character types.

Andrey Platonov’s life journey was accompanied by revolutions, wars, hunger, cold and devastation. Labor and dreams, romantic creativity and electricity, mechanics and soul are all the writer’s favourite topics. All of his “innermost men” exist in such atmosphere. His main characters always resemble the writer himself: an electrician, digger, engine driver, engineer and meliorator - in a word, “a workman”.

The exposition is based on “The country is not complete without me…” exhibition, which took place in Moscow in 2010. Victor Molchanov was the author and curator of the exposition. The Russian Union of Art Photographers and Platonov Arts Festival are going to recreate this exposition in Voronezh. “We have not tried to illustrate Platonov’s prose with the help of photography. It is impossible. Our exposition is more like a photographic essay or a photographic memorandum about Platonov’s epoch. The center of the exposition is Platonov, a Russian citizen at his best and a thinking creator of the country”, – Victor Molchanov says.

Photographs presented by the artistic group “Kamenny Poyas” (The Stone Belt) were selected from among family archives and were first used in a 4-volume edition dedicated to the history of Chelyabinsk Region (“Photographs of Chelyabinsk Region” 1900-2000).
Photographs of that epoch show workers and peasant women. These are the people of hard fate, as they had to bring to life the grand social experiment, which involved not only the South Urals but the country at large.