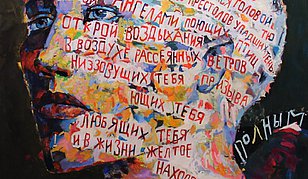 Igor Tishin is one of the most remarkable modern artists of Bielorussia. Although he often works in Europe, the plots and imagery of his paintings, installations and photographs remain to be Bielorussian: they are directly connected with post-soviet reality and present political and historic aspects.

Igor Tishin is, to some extent, a mythological figure in Bielorussia, as his works have earned such epithets as “esthetics of absurdity”, “ferocity”, “sensuality”, “burlesque”, “paradox”, “brutality” and others.  At the same time nobody has dared to give a real analysis of his works.  His wayward and impulsive art, half-marginal ironic projects of 1990s and gloomy art attacks in the photography of 2000s completely puzzle a potential researcher of his art.

Igor Tishin has had his solo exhibitions in Belgium, France, Switzerland, Holland, Germany, Luxemburg, Great Britain, Spain, Italy, Poland, Kuwait and Bielorussia.
Igor Tishin’s project “Human Matter” (an image from a novel by Andrey Platonov “The Foundation Pit”) is status-related to “Voronezh as the CIS cultural capital 2015”.  The exhibition will consist of 24 works, 6 of which - those based on Andrey Platonov’s prose and the writer’s portrait – will be accomplished in Voronezh.

Igor Tishin uses a technique called “painting on photographs” showing both contrast and synthesis of reality and spontaneity of an artist.  Photographs are a basis for his artistic intrusion: some parts of photographs disappear under a layer of paint and only then some other parts of these photographs are understood in a different way. The artist says that his portraits, based on Platonov’s prose, “will show Platonov’s original and awkward manner of writing and his Russian existentialism”.