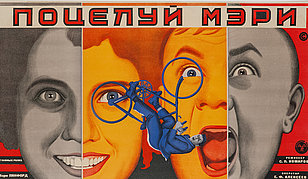 Leonid Andreev, a writer, thinks about the future of the cinematography in his work “Letters about the Theater”, “The fantastic Cinemo!... If the first and foremost aim of art is to create communication between people and their lonely souls, then what an enormous, unimaginable, socio-psychological task should this artistic apache of the present perform!<…>  The Great Cinemo!..”.

Opening this display, Platonov Festival turns to film art for the first time, in fact, the very roots of the latter, i.e. the silent film era. The exposition comprises 73 works by the first Russian artists of the film poster (G.Alexeev, M. Kalmanson, P. Zhytkov) and the masters of avant-garde (A. Lavinsky, Stenberg brothers, N. Prusakov, M. Wexler and others) from the collection of the State Russian Museum. The works were created in the most interesting period in the history of the genre, the beginning the 20th century: starting with the time when the art of the film poster first appeared in 1910s and up to its peak in 1920s.

The rise of Russian cinematography took place during World War I and that was the time when a great number of Russian film posters were created.   The film poster became an integral part of the epoch: streets were dappled with film posters. The first film posters appealed to the mass audience and reflected the lubok esthetics in its “pseudo-national” style.  Another type of film poster revealed print design features – sketches and cartoon-like images. The Russian cinematography also developed a genre of fine psychological drama aimed at educated social groups. A more sophisticated manner was needed to promote this genre and this style was used by P. Zhytkov and by the artist who signed his works with a cypher “Iro and L”.

The development of the film poster of 1920s was in line with the esthetics of constructivism.  The artists mastered the skill of photomontage: characters often became the central part of the composition holding all the other elements together. The example of the latter is “Battleship Potemkin” by Anton Lavinsky.  Apart from photomontage the artists started to use an unusual angle for their poster. The complex composition of a film poster was created with the help of reverse perspective, a combination of three-dimensional and two-dimensional details and a mixture of bold and disharmonic colors.

The most remarkable works created in this style are the works by Stenberg brothers, Mikhail Dlugach and Grigory Rychkov. Film posters that used letters instead of pictures were also being developed at that time (works by Mikhail Wexler).

The art of the film poster gave the prominent masters of soviet avant-garde of 1920s room for artistic experiments: they purposefully got rid of commitment to masses, which was rooted at dawn of silent cinematography, and made film posters become a part of genuine art.