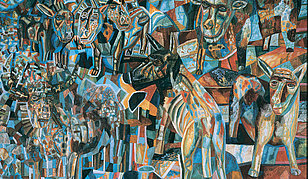 It is for the first time that the Platonov Arts Festival has collaborated with the Russian Museum, one of the largest cultural institutions of our country. 43 works by Pavel Filonov, a remarkable artist, one of the leaders of avant-garde and the founder of analytical art, that we are going to see in June have never been displayed in Voronezh before.  The works that will be shown are from the collection of the State Russian Museum where most of Filonov’s works are kept.

Experts say that there is a link between the artistic principles of Pavel Filonov and Andey Platonov, a kinship in the mindset and understanding of art. Their paths never crossed, but each of them stands apart their colleagues and contemporaries and remains to be an unsolved mystery to the present day. Pavel Filonov is connected with Voronezh – as a young painter he worked on the interiors of the Olgino estate in Ramon.

Pavel Filonov was well-acquainted with Mayakovsky and Khlebnikov, geniuses of avant-garde, but he pushed the borders of the trend. He proclaimed the rehabilitation of pictorial art and painting (opposing Malevich), “accomplished paintings and accomplished drawings”. According to Filonov, every touch of the canvas is a “unit of activity”, an atom. He insists that apart from form and color there is a whole world of invisible phenomena that cannot be distinguished by “a seeing eye”, but can be perceived by “a knowing eye” with its intuition and experience. Pavel Filonov worked 18 hours a day and said that a painter had to be “an Art Worker” (Diary 1934).

As Pavel Filonov himself put it, his first painting was finished in 1910. It was a picture called “Heads”. Later, he often returned to this theme. The exhibition “Pavel Filonov. Art Worker” will present some later paintings from the “Heads” series, which are considered by some experts to be self-portraits. Viewers of the Platonov Arts Festival will see his numerous works called “formulas” by the painter:“Formula of a Komsomol Member”, “Formula of Prime”,“Formula of Bourgeoisie”, “Formula of Intervention”, “Formula of Revolution”, “Landscape (Formula of Spring)”, his last painting “Holy Faces” and his other masterpieces.

Pavel Filonov participated in World War I and enthused over the revolution, but the soviet leaders considered his views to be a dangerous utopia. Little by little, he became isolated from the world. Filonov tried to change this situation and founded the union “Masters of Analytical Art”, which functioned until his death. He did not take orders and gave free lessons, living on his pension as “an academic researcher of the third category”.  Pavel Filonov starved and tried to spend less on the materials needed for painting. He died in Blockade Leningrad in 1941.

In his lifetime Pavel Filonov never had solo exhibitions. His first big solo exhibition was opened in the State Russian Museum in 1988. A great work on saving Filonov’s paintings had been done before this exhibition. His paintings were created with oil colors on thin cardboard (the painter did not have money for the canvas) and had become fragile with time.  The art restorers’ task was to copy or to stick the cardboard onto the canvas so that the works could be exhibited.
Pavel Filonov has held a unique position in Russian avant-garde and influenced the painters of both his and our time. Although, the soviet state did not accept the painter, they could not ignore him either. Anatoly Lunacharsky said:  “Filonov is the greatest master. It is not easy to understand him, but that does not belittle his accomplishments, which the country will be proud of in days to come”.