In Space with No Borders 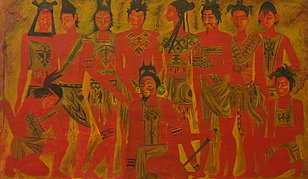 Exhibition Hall of Union of Artists

The idea of the exhibition “In Space with No Borders” emerged after Voronezh was announced “the CIS cultural capital 2015”. In collaboration with our partner, A.A.Bakhrushin State Central Theatre Museum, we continue familiarizing the audience of the festival with the art of scene design. Last year, we successfully presented the exhibition “David Borovsky. Selected works”; this year, we are going to display the masterpieces by the set designers from the former USS republics.

A.A.Bakhrushin State Central Theatre Museum was founded in 1894 by Aleksey Aleksandrovich Bakhrushin, a well-known manufacturer and patron of the arts from Moscow.  The museum celebrated its 120th anniversary last year. This year, the museum will celebrate 150th birthday anniversary of its founder.