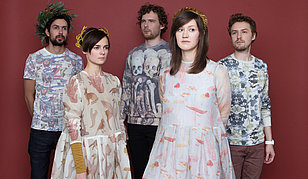 Park “Alye Parusa”
For the first time in Voronezh!

«Naadya»  is a solo project of Nadezhda Gritskevich, a singer in the band «Moremoney». Nowadays she is one of the central performers of independent music in Russia.

The group «Naadya» premiered in June, 2013 at the festival «Afisha Picnic». The group made a name for itself from the very beginning and now it is a must-see-act at any music event.  The group has given full-house concerts at the best stages of Moscow, such as «Solyanka»,   «Gogol-Center» and others.  «Naadya»  performed at all famous festivals such as «Yarmarka» in Yekaterinburg, «Dvizhenie» in Perm,  «RussiaMusicChange» in Stockholm, «RedBullSounderground» in Rio de Janeiro in  2014. «Naadya»  has prepared a special program with the children’s choir for the biggest Moscow festival «Svoy Subbotnik». The group also performed as backup for the popular experimental art-rock band «Warpaint» (USA).

All these bright moments were steps on the way to the release of a debut album «Naadya». The group was working on the album in a studio of «Moralny codex» in Moscow, but the final work on the album took place in The Record Company in Boston. The album consists of eleven catching and elaborate songs in Russian which are a special manifesto for the new independent music in Russia. This original music has enough power to find its audience and to draw them into its whirlpool.

«Naadya» was called «one of the main releases of the year» by «Afisha», «Wonderzine», «The Flow» and other mass media. The world’s biggest music distributor Itunes called the group a «rising star» of the season in January, 2014.

«“Naadya” is chamber music with combination of modern trends by British pop-minimalists and mystique of Russian lyric»
Last.fm

«Album “Naadya” was long-awaited for a good reason. <…> It is a very beautiful and restless elegy about a murderous conflict between sense and duty, ethics and esthetics »
Alexander Gorbachev, «Afisha-Volna»

For the first time in Voronezh!