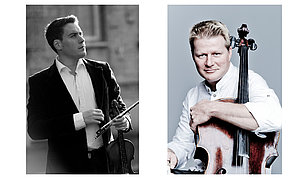 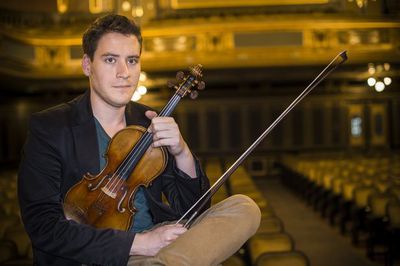 Kristóf Baráti (born 1979) is a Hungarian violinist, and is widely regarded as one of the most talented violinists to emerge in recent years. He began his violin studies at the age of five and already from the age of eight he made his first solo performances with the leading Venezuelan orchestras. At the age of eleven he was invited to Montpellier to give a recital at the prestigious Festival de Radio France. His studies continued in Budapest with Miklós Szenthelyi and Vilmos Tátrai at the Franz Liszt Academy of Music. During this period he won first prize at the Lipizer Competition in Italy and second prize in the Long-Thibaud Competition in Paris. In 1997 his career takes a new turn after winning third prize and the audience prize of the highly prestigious Queen Elisabeth Competition in Brussels, being the youngest finalist. After this success he redefines his violin technique with Eduard Wulfson, whose knowledge was influenced by great violinists of the 20th century such as Nathan Milstein, Yehudi Menuhin and Henryk Szeryng. In 2010 Baráti won the highly praised Paganini Competition in Moscow, considered as the „Oscar Prize” of violinists.

Kristóf Baráti has got numerous awards, including the Kossuth Prize, the most prestigious award of his native Hungary in the domain of culture. He plays the 1703 "Lady Harmsworth" made by Antonio Stradivarius, kindly offered by the Stradivarius Society of Chicago.

"Kristóf Baráti is the most talented violinist of his and many generations.
He is a true soloist!"
Ida Haendel


“A talent like him comes along once in a decade, perhaps once in a generation”
Fanfare


The Hungarian cellist László Fenyö (born in 1975) has belonged to the world elite of cellists since he won the 2004 International Pablo Casals Contest in Kronberg, Germany. He is hailed by both audiences and critics as one of today’s most exciting artists, possessing the unique capability of presenting the intentions of the composer but also allowing the music to speak at the forefront, thereby capturing and fascinating his audiences. Through his breathtaking technical skills and emotive expressiveness, his concerts become special experiences, where the music can be newly explored with every performance.

In Hungary, his home country, László Fenyö has long been one of the most sought after soloists; his performances – solo recitals, chamber music events and concerts with orchestras, are broadcast live and recorded by the Hungarian Radio. He has played with most Hungarian orchestras and conductors. In addition, in 2005 he received the highly coveted Franz Liszt Prize awarded by the Hungarian Ministry of Culture, as well as the Junior Prima Prize in 2008.

László Fenyö gives master courses all over the world, since October 2009 he is a lecturer at the Academy of Music and Fine Arts in Frankfurt and since 2012 he teaches as a professor at the Musikhochschule Karlsruhe. László Fenyö has been principal cellist of the Philharmonia Hungarica 1997-2001 and of the Frankfurt Radio Symphony 2001-2012.
László Fenyö plays a cello made by Matteo Goffriller from 1695.