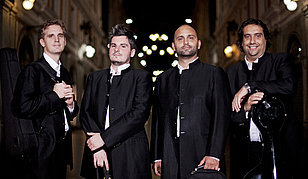 Quartetto di Cremona – string quartet, one of the most interesting chamber ensembles of Europe.

Internationally renowned for their "extremely mature and lyrical sound" (Strad), the Quartetto di Cremona now graces the stages of the most prestigious venues. Their focus and intensity brings life to music from the “tight blend and immaculate voicing” of their Brahms to the “sleek and elegant” dynamic countouring of their Mozart (Strad). The Quartetto di Cremona’s dedication to their work as a string quartet shows through their music.

The Quartetto di Cremona has toured extensively in Australia and performed at the renowned Perth International Art Festival Australia. In the USA, they recently won the eleventh Web Concert Hall Competition and they will perform at Metropolitan Museum in March 2013.

In their homeland of Italy they have made their name performing at the Accademia di S. Cecilia in Rome and at the most renowned Italian music societies. The Quartet was nominated "Artist in Residence" at the Societa' del Quartetto of Milan and will be involved in various projects culminating in 2014 for the 150th anniversary of the Societa' del Quartetto – when they will perform the complete cycle of Beethoven quartets.

Their extensive repertoire ranges from the early Haydn quartets to Wolfgang Rihm and Helmut Lachenmann, with particular interest in contemporary Italian music including the composers Fabio Vacchi, Luciano Berio and Luigi Nono.

An important part of the Quartetto di Cremona’s activity is teaching master classes throughout Europe. Since Autumn 2011, the Quartet has taught at the Walter Stauffer Academy in Cremona.

The Quartetto di Cremona has been chosen as a testimonial of the International project "Friends of Stradivari".