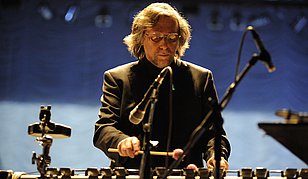 Nostalgia for the concert “Nostalgia”,

Vladimir Martynov – “Hierarchy of Reasonable Values” based on the lyrics by Velimir Khlebnikov,

Mark Pekarsy Ensemble is the first ensemble of percussion instruments in Russia. It was founded in 1976.

The Ensemble made a triumphal debut at the Berlin Festival “Berliner Festwochen”  in the mid of 80s. Newspaper “Tagesspiegel” called the Ensemble an “eastern competitor” of the famous percussion ensemble in Europe “Les Percussions de Strasbourg”.
Mark Pekarsky’s Moscow Ensemble is the participant of many ceremonies, such as the opening of art exhibitions in the Pushkin Fine Arts State Museum, in the State Tretyakov Gallery, in the Central Artists’ House on the Krymsky Val as well as the opening of the international film festivals such as “The Golden Mask”, “The Golden Eagle”, “Crystal Turandot”.

Working on the concert programmes of the Ensemble has turned to the original dramatized actions. The members of the Ensemble have invented a new genre – Percussion Performance. “You think, that there are four elements to music, aren’t there? Melody, harmony, rhythm and timbre? No way! There are five of them as demonstrated Mark Pekarsky … You should add theatre!” — Glasgow Gerald (Scotland).

Mark Pekarsky is an initiator of a great number of unique projects such as “Pekarsky-Percussion Days”,  “Musical Landscapes”, “In the Beginning There Was Rhythm”, “Opus XX” and others.

«Can percussion music hold audience’s attention the whole evening? – Yes, it can, if we are speaking about such a brilliant ensemble as Mark Pekarsky Ensemble »

Nostalgia for the concert “Nostalgia”,

Vladimir Martynov – “Hierarchy of Reasonable Values” based on the lyrics by Velimir Khlebnikov,