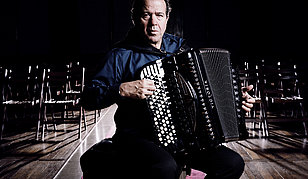 Richard Galliano is a French composer, one of the best accordionists in the world, the creator of «new musette».

In the past, there never seemed to have been one great artist associated with the accordion, an instrument that, because of its connotations, seemed as far removed from swing as it is possible to be. Then along came Richard Galliano, fired by an unrivalled determination to share his conviction that the accordion was worthy have a place at the heart of jazz alongside the saxophone and trumpet. Inspired by the admiration he felt for his friend Astor Piazzolla, creator of the Tango Nuevo, Galliano succeeded not just in doing this, but with his "new musette" style managed to breathe new life into a thoroughly French tradition that seemed to have got stuck.

Son of the Italian-born accordion teacher Lucien Galliano, Richard started playing the instrument at the age of four. At the same time as he was learning the accordion, he also studied harmony, counterpoint and trombone at the Nice Conservatoire. It was the discovery of the music of Clifford Brown that introduced him to jazz, at the age of 14, and while he picked up his style of playing choruses, he found, to his amazement, that the accordion was almost unknown in this type of music.

In 1973 Galliano moved up to Paris where he impressed Claude Nougaro. He spent three years as arranger and conductor as well as composer in a group where he found himself playing alongside real jazz musicians. He also played on countless recordings by popular French artists like Barbara, Serge Reggiani, Charles Aznavour and Juliette Gréco, and on film scores. From the beginning of the 1980s he was able to play much more often with jazz musicians from all backgrounds and improvise alongside them: these included Chet Baker (in Brazilian repertoire), Steve Potts, Jimmy Gourley, Toots Thielemanns, the cellist Jean-Charles Capon, with whom he cut his first disc, and Ron Carter, whom he paired up with to make an album in 1990.

In 1988 Richard Galliano creates the renown "Festival des Nuits de Nacre" in Tulle (France) and was its artistic director between 1988 and 1992.

In 1991, following the advice of Astor Piazzolla, whom he had met in 1983 while working on incidental music for the Comédie Française, Galliano went back to his roots, and the traditional repertoire of Valses-Musette, Javas, Complaintes and Tangos that he had long disregarded. Taking a lead from the spirit of Gus Viseur and Tony Murena, he managed to rid the accordion of its old-fashioned image by working on the three-four rhythm, and introducing a whole new rhythmic concept and harmonic style to adapt it to jazz. He announced his new approach on the CD New Musette that he recorded with Aldo Romano, Pierre Michelot and Philip Catherine for Label bleu, and it won him the Académie du Jazz's Django Reinhardt Prize for "French musician of the year" in 1993.

This led on to a whole series of albums where Galliano, playing his trademark Victoria accordion, has shown his ease in adapting the instrument to the freedom of jazz. His assurance, mastery of phrasing, and ability to get a vast range of tone-colours from the accordion have meant that he has broken down musical barriers with an instrument that cuts across all genres. In 1996 he crossed the Atlantic to record his New York Tango with George Mraz, Al Foster and Biréli Lagrène, a disc that later won him a Victoire de la Musique prize. He started to gain an international reputation, and a host of new collaborations followed. He created some unusual instrumental pairing, getting together with artists ranging from Enrico Rava, Charlie Haden and Michel Portal (their 1997 disc Blow Up was a huge commercial success, selling more than 100,000 copies), to his fellow-accordionist Antonello Salis, in Italy, and the organist Eddy Louiss, in 2001.

There have also been one-off collaborations with Jan Garbarek, Martial Solal, Hermeto Pascoal and Anouar Brahem, Paolo Fresu and Jan Lundgren, and Gary Burton, among others. In 1999 he presented his own compositions, with chamber orchestra accompaniment, together with pieces by Astor Piazzolla. This led to his 2003 homage Piazzolla Forever, in which he went back to playing the music of his mentor.

Galliano is an exceptionally versatile musician, able to make his mark in all kinds of musical contexts, from solo appearances to playing with big bands.

Richard Galliano has the privilege to become the first accordionist-composer to record on the legendary German label “Deutsche Grammophon”. His first album for the label is dedicated to the music of J.S. BACH and rapidly after its release becomes the bestselling classical album of the year with over 40,000 copies sold.

Keen to pass on his wealth of experience, he is the author, together with his father Lucien, of an accordion method that won the SACEM prize for Best Pedagogical Work in 2009.

“Galliano is indeed the Jimi Hendrix of the accordion”
Vintage Guitar