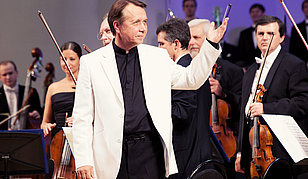 Johannes Brahms – Variations on a Theme by Joseph Haydn (orchestration by M. Pletnev)

The Russian National Orchestra was founded in 1990 by pianist and conductor Mikhail Pletnev and today is recognized as one of the world’s top orchestras.  Of its debut at the BBC Proms in London, the Evening Standard wrote, "They played with such captivating beauty that the audience gave an involuntary sigh of pleasure." The RNO is also described as "a living symbol of the best in Russian art" (Miami Herald) and "as close to perfect as one could hope for” (Trinity Mirror).

It was the first Russian orchestra to perform at the Apostolic Palace, Vatican and in Israel.

The RNO's charity recording of Prokofiev's Peter and the Wolf and Beintus's Wolf Tracks, conducted by Kent Nagano and narrated by Sophia Loren, Bill Clinton and Mikhail Gorbachev, received a 2004 Grammy Award, making the RNO the first Russian orchestra to win the recording industry's highest honor.

A regular visitor to the Schleswig-Holstein, Gstaad and Rheingau festivals, the RNO is also the founding orchestra of Napa Valley Festival del Sole, Festival of the Arts BOCA in Florida, and the Singapore Sun Festival, and resident orchestra for multiple seasons of the Tuscan Sun Festival in Cortona, Italy. The RNO launched its own annual festival in 2009, held each September in Moscow.

In 2008, a panel of international critics assembled by Gramophone named the Russian National Orchestra as one of the world's top orchestras.

The RNO is unique among the principal Russian ensembles as a private institution funded with the support of individuals, corporations and foundations in Russia and throughout the world.

Grammy-nominated Ukrainian-British violist and conductor Maxim Rysanov has established himself as one of the world’s most vibrant and charismatic musicians of his generation. He is principally known for his performances as a violist, guest of the crème of international music scene such as BBC Last Night of the Proms, Edinburgh Festival, Salzburg Festival. He now combines his viola performance with a career as a conductor.

Maxim has long been recognized by the international music scene and his list of prizes affirm that status. These include the Classic FM Gramophone Young Artist of the Year Award and the BBC Radio 3 New Generation Award, as well as the Geneva, Lionel Tertis and Valentino Bucchi competitions.

He is delighted to have a Giuseppe Guadagnini viola (1780) on extended loan from the Elise Mathilde Foundation.

"Maxim Rysanov is a prince among violists"

Johannes Brahms – Variations on a Theme by Joseph Haydn (orchestration by M. Pletnev)