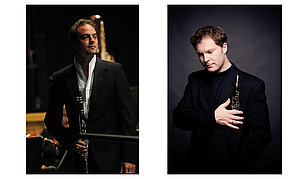 Olivier Patey and Alexei Ogrintchouk are the principal musicians of The Royal Concertgebouw Orchestra (Amsterdam) under the direction of Mariss Jansons. This is one of the best symphony orchestras and the oldest one in Netherlands. The most authoritative classic music magazine «Gramophone» claims it to be №1 in the world.

Principal clarinettist Olivier Patey is a prizewinner of the ARD International Music Competition and the Carl Nielsen International Music Competition. As a soloist, he has worked with the Bavarian Radio Symphony Orchestra, the Munich Kammerorchester and the Prague Philharmonic Orchestra. In 2005, Patey joined the Mahler Chamber Orchestra in Berlin, where he was appointed principal in 2009. He is also a member of the Lucerne Festival Orchestra. Before joining The Royal Concertgebouw Orchestra, Patey had served as principal clarinettist of the Rotterdam Philharmonic Orchestra for one year. Patey is also active as a chamber musician. He is involved in the Arties Festival in Mumbai as a co-founder of the Arties Records label.

“Olivier Patey is a musician of endless poise and fantasy. <…> Clarinet playing and music-making of the highest order!”
Daniel Harding, conductor

Alexei Ogrintchouk is one of the most outstanding oboists performing today. Originally from Moscow, Alexei was already performing all over Russia, Europe and Japan from the age of thirteen. He has been the winner of a number of international competitions including the prestigious CIEM International Competition in Geneva at the age of nineteen. He was also the winner of the European Juventus Prize in 1999, a recipient of two Victoires de la Musique Classique prizes in France in 2002, the Triumph prize in Russia in 2005 and a Borletti Buitoni Trust award winner in 2007. He has been part of the prestigious Rising Stars and BBC New Generation Artists programmes.

Since August 2005 Alexei Ogrintchouk has been first solo oboist of the Royal Concertgebouw Orchestra in Amsterdam under Mariss Jansons.

As a soloist, Ogrintchouk has worked with the world’s greatest orchestras including The Royal Concertgebouw Orchestra, the orchestras of the Bolshoi and Mariinsky Theatres, all the BBC orchestras, the Orchestre de la Suisse Romande, the Royal Philharmonic Orchestra, the Russian National Orchestra, the Konzerthausorchester Berlin, the Budapest Festival Orchestra and many others. His chamber music partners have included Gidon Kremer, Radu Lupu, Thomas Quasthoff, Mischa Maisky, Vladimir Spivakov, Yuri Bashmet and other eminent musicians.

Ogrintchouk teaches at the Royal Academy of Music in London and at the Royal Conservatoire in The Hague. In 2011, he succeeded his former teacher Maurice Bourgue at the Haute École de Musique in Geneva. He also gives masterclasses at the Pablo Casals Chamber Music Academy in Prades and at the Mahler Academy in Ferrara.