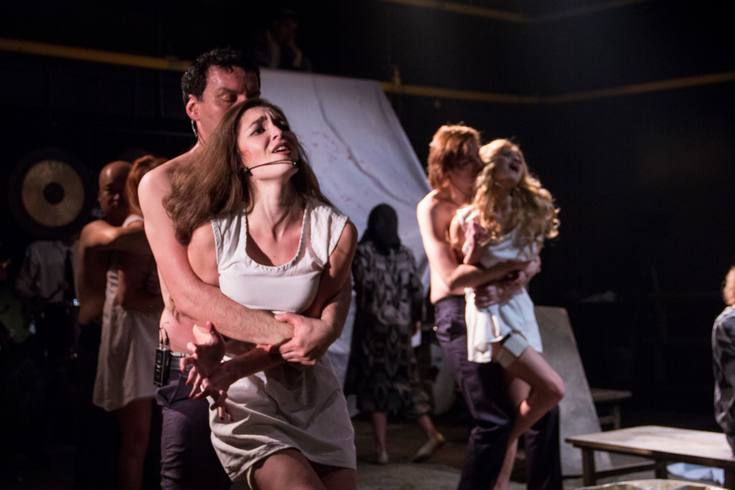 The Ilkhom Theatre, a leading theatre of the Middle Asia and one of the very first non-state professional theatres in the history of the former USSR, was founded in 1976 by a renowned director Mark Weil.

Ilkhom’s productions have been shown in Ireland, Germany, Austria, France, Italy, Holland, Norway, Poland, Bulgaria, Russia, the USA, Japan and other countries.
“Seven Moons” is an altered title of the poem called “Seven Planets”, written in 1484 and considered the apex of work of the greatest Turkic poet Alisher Navoiy. Vladimir Pankov, the director, used an extract from the poem in his production – as he has it, “even five lines of the genius epic are enough to stage a performance; after all, Navoiy is the same caliber poet as Homer”.

This play is a parable about a mysterious balance between fame and infamy, splendor and squalor, about a sheikh who had it all and lost it all, pride being his downfall. This play is a tragedy of unreachable wishes, condemning lust for power - the paranoia, which hurt’s artist’s, lyrical soul.

The premier took place in 2010. The performance took part in the Golden Mask festival in 2011.

“Seven Moons” is a multimedia musical project but it is neither an opera, nor a musical – it is SounDrama. This genre emerges “when one sound morphs into another, when every actor becomes a musical instrument, when all the drama is set to a full score”, Vladimir Pankov explains.

Vladimir Pankov is the artistic director of SounDrama studio, an actor, a musician, a composer, who has written music for over twenty productions, one of the leading Russian directors of his time, credited with performances at such theatres as Moscow Art Theatre named after A.P. Chekhov, «Et Cetera» theatre, Theatre.doc, the Theatre of Nations and others.

“From my viewpoint, this performance is not to be missed. <…> Pankov strikes an amazing balance between the tyranny of Asia and the human degradation of Europe. Here ecstatic, drugged lust for power rhymes with European-style drunken wandering in the manner of Apollinaire or Baudelaire. In this sense, poetic soul is bounded by neither geography, nor time.”

“As a matter of fact, Moscow is quite familiar with “soundrama” – a synthetic genre invented by director Vladimir Pankov and developed in plays by his Moscow troupe. Ilkhom needed new ideas. Similarly, Vladimir Pankov needed to take a dip in a different culture and work with new actors to make a move forward: “Seven Moons” seems the most harmonious of his productions”