Based on texts by Bertolt Brecht
Main programme 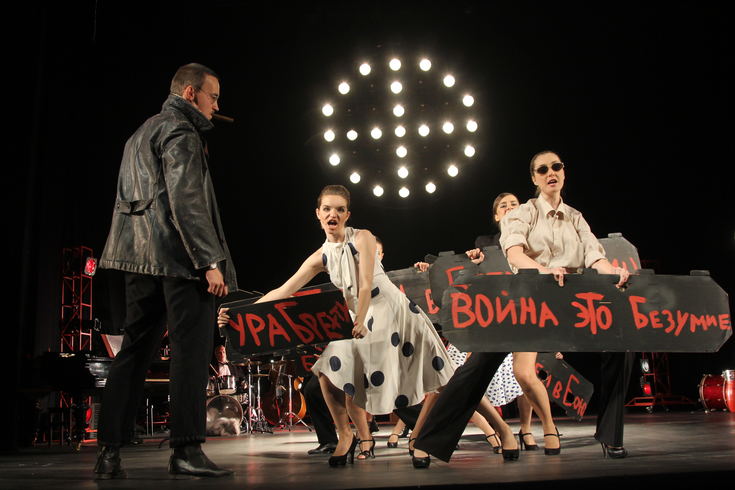 «We think that the theater is a good sport. And today you will get this sport! Let the pleasure you derive from our performance make you want to smoke so badly that you start puffing right in the middle of action without waiting for the interval!» , this bold call for the audience sets a very special atmosphere from the very beginning. Everything is allowed here. Everything is allowed on the stage. You can screw up your courage and jape during «Cabaret Brecht». You can even tell the truth, even though “the falsity is going with solid steps all over the country».

Sergey Volkov, who plays the part of  Bertolt Brecht - in a worn-out jacket, a cigar clamped between his teeth - looks like the German playwright not only in his appearance. Critics say that the young actor bears a strong psychological similarity to Brecht.  Sergey Volkov, like almost all the members of «Theater BB», is a graduate of the course of Anna Aleksakhina,  the Honored Artist of Russia, in Saint Petersburg State Theater Arts Academy.  «Cabaret Brecht» is his graduation work, whose premiere took place in autumn 2014.

The performance is produced by Yury Butusov, the principal director of the Lensovet Theater, a laureate of Stanislavsky Award, St. Petersburg top theater award “The Golden Soffit” and the main theater award in Russia  “The Golden Mask”. Bertolt Brecht is one of Butusov’s favourite playwrights and it is not for the first time that the producer has staged Brecht’s works.   For example, the play «The Good Person of Szechwan» successfully premiered last year at several festivals, including Platonov Arts Festival, and was a revelation for the Russian audience.

Nevertheless, this is the first time that Yury Butusov looks at the difficult biography of the playwright and poet, whose works were burnt by fascists, who was the director and creator of an epic theater, a man torn between two women (his wife – actress Helene Weigel and his close friend and lover Margarete Steffin). Brecht gives the producer an opportunity to talk about the present day and say: «I am against lies. I am against wars».

The authors present the difficult story using the form of cabaret which allows grotesque and burlesque when speaking about essentials and routine.  This play is a number of musical performances connected but emotionally. The orchestra plays the music by Curt Weill, Brecht’s friend, while the performers perform zongs in German, English, French and Russian. As Liza Minnelli’s character sang  in the famous film by Bob Fosse: «Life is cabaret. Welcome to the cabaret!».

«This time Yury Butusov shows  a cabaret where reality and fiction dance together waving flags of the new theater and chanting anti-war slogans of the new world. <…> Maybe right now, after two world wars and on the verge of the third world war, Bertolt Brecht can change the world».

«Bertolt Brecht and Yury Butusov make a promising combination of names. If we add Curt Weill to this combination, the effect may well prove explosive».

«The young performers of the theater have created something really mind-blowing! This is some sort of a powerful avalanche that carries you away. <…> Supermassive immersion into the material takes place – poems are followed by monologues, scenes with Margarete (Tonya Sonina) give way to scenes with Helene (Sofia Nikiforova), scenes from life alternate with songs and zongs. All this lot and this crazy tempo create, literally speaking, the air that Brecht breathed and his most accurate and detailed portrait».