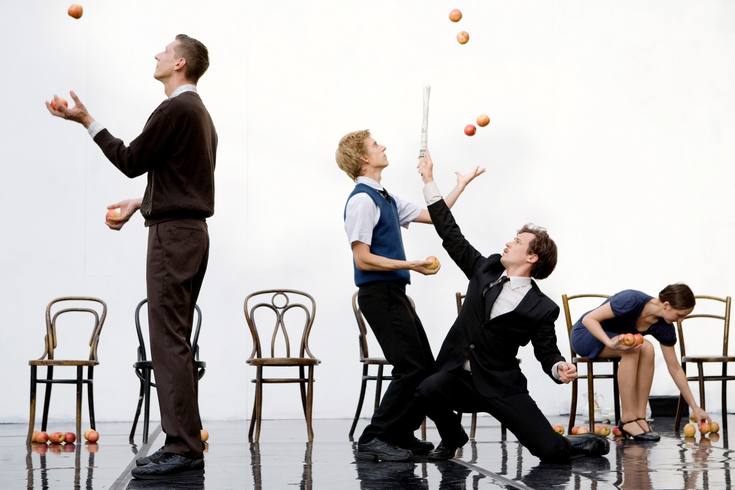 Formed in 1992 by world-renowned juggler Sean Gandini and champion rhythmic gymnast Kati Ylä-Hokkala, Gandini Juggling continues to be at the vanguard of contemporary circus, reinventing and reinvigorating juggling for the 21st Century. The company is one of the pioneers in using contemporary dance and mathematical notations in the field of juggling. An ever-evolving ensemble made up of a virtuoso core group of four jugglers, they regularly expand to include up to twenty for specially commissioned events and performances. Ferociously prolific, they are constantly creating new works from radical fusions of art and juggling, through theatrical juggling performances, to family friendly entertainment. Their work transcends cultural barriers. The simple pleasure of watching people move whilst keeping objects in the air has a natural theatrical quality that beguile audiences.

Since its creation, the company has performed over 4,500 shows in 40 countries. They continue to be programmed at many of the most prestigious festivals and venues throughout the world. In addition, Gandini Juggling continue to be in demand at leading circus schools, teaching workshops, creating performances and supporting the next generation of circus artists.


Sean Gandini is one of the world’s leading juggling creators. He has been devising, teaching, and enthusing about all facets of juggling for two decades. As well as running Gandini Juggling, he has taught at Britain’s two circus schools, Circus Space in London and Circomedia in Bristol. In addition, he holds international master classes on the finer aspects of juggling. He was a guest teacher at the Laban Centre for Contemporary Dance and continues to teach master classes all over Europe, North and South-America.  He is a regular contributor to all juggling magazines, appeared in the BBC2 programme ‘The Mathematics of Juggling’ and has released numerous videos on technical aspects of juggling.

Premiered at the National Theatre’s Watch this Space festival in 2010, Smashed is an hour long piece involving nine skilled jugglers, 100 red apples and a soundtrack featuring popular songs ranging from Tammy Wynette to Music Hall and Bach. A series of nostalgic filmic scenes explore conflict, tense relationships, lost love, and afternoon tea. Inspired by the work of the great choreographer, Pina Bausch, director Sean Gandini and Kati Ylä-Hokkala has borrowed elements of her gestural choreography and combined them with the intricate patterns and cascades of solo and ensemble juggling. Simultaneously evoking great pleasure and small disquiet, Smashed lightly disrupts the rigid conventions of etiquette, dress and body language. The result is a new hybrid of juggling which is performed with meticulous unison and split-second timing. This funny, inventive and characterful work is akin to dance theatre and will challenge your perception of contemporary juggling.


“Glorious. When it comes to juggling, the Gandinis pip everyone else”
The Guardian

“Inventive and very funny”
The Independent