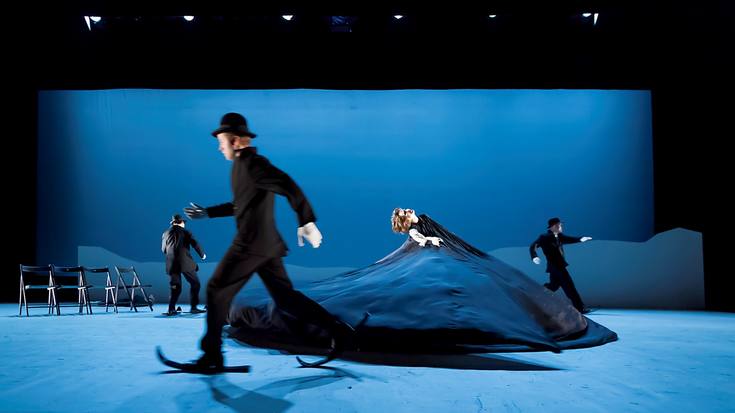 Philippe Genty is a French theatre director and choreographer, one of the most famous puppet masters worldwide. In 1967 together with his partner and co-author Mary Underwood he creates Compagnie Philippe Genty.

Compagnie Philippe Genty has toured all over the world: Europe, USA, South America, Australia, Japan, China, India and Africa. Since 1978, Genty regularly visits Russia – his performances were shown within Chekhov International Theatre Festival (Moscow) in 2007, 2009 and 2011. “Still Travellers” (Voyageurs immobiles) was presented at the 1st Platonov Festival edition in Voronezh in 2011.

“Forget Me Not”, one of Philippe Genty’s most beautiful performances, has toured the whole world since it was first staged in 1992. In 2012 Genty and Underwood created a new version of the original work in collaboration with Norwegian actors – Nord Trondelag University College de Verdal graduates, who brought a mystical atmosphere and northern colors onto the stage.

In his performance “Forget Me Not”, Genty creates a wondrous world of optical illusions, bringing to life stories and legends of the past and plunging the spectators in the depths of their consciousness. The actors merge with the puppets on the stage and there is no telling ones from the others in this extraordinary puppet ballet.

“It’s a real bliss to find yourself on the raft navigated by Philippe Genty. It takes us to the other worlds on the wings of the unmatched visual poetry that is perfectly accessible to all aged from 7 to 107… These worlds materialize the dreams and nightmares of mankind that always come back. In Genty’s production they are performed by seven great mimes/actors/dancers.”

“Strangely enough, in this ballet the puppet and the living performer are almost indistinguishable. The actors’ flexible bodies are twisting as they reach for each other, suffer, jump, have doubts and are in the end dragged into a huge net that begins to whirl slowly transforming the space by this forlorn, dizzying waltz. The magic continues as so does the winter tale in which the naïve imagery is washed in subtle humor. This performance whiffs with freshness and enthusiasm. <…>
According to Genty and Mary Underwood they managed to express dreams in the language of dance. The young Norwegian company perfectly embodies the complex score of the production.”