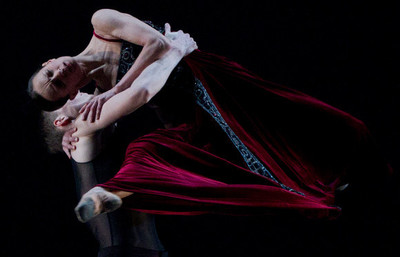 The play is recommended for the audiences older 12 years

“The source of my inspiration was the work “Nunc Dimittis” by Arvo Pärt, and as long as the ballet is put on the religious music, it becomes  mystic, "supernatural".  Pärt wrote the music for Simeon’s pray, but it is also an abstract ballet, there are no specific characters, you will not find Virgin Mary, Jesus or Simeon here. I’d like to emphasize that prima ballerina Ekaterina Borchenko inspired me creat the ballet,it’s possible to say that “Nunc Dimittis”was created for her”.

Choreographer, who has never suffered directness puts ballet that is not the first century unraveling foreigners. Yes, it is about the "mysterious Russian soul", no more, no less. 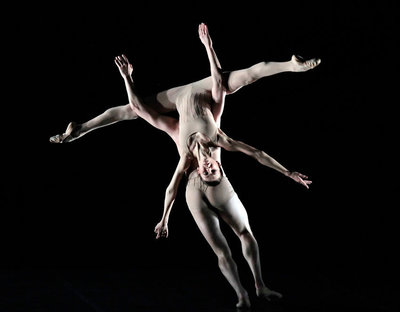 "Without Words" is the second work by Nacho Duato for the famous American Ballet Theatre troupe. Nacho Duato selected six songs by Schubert the ballet however as the name shows us it is an instrumental music without words. Like the composer, the choreographer  deprives the dance even of touch of romance. Love and death become the central subjects according to the logic of music. A new world, containing all its features is implemented as a dark existential stage space that is specific for XX century. In this ballet Duato is appearing before us being spontaneous, straightforward and unadorned, presenting a universal life cycle. 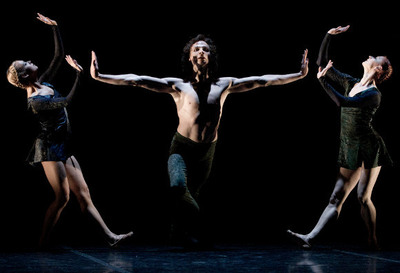 Duato's choreography is almost always dictated by the choice of music and perhaps it is true mostly for "Duende" as the music is the only source of inspiration in it. Duato’s love to Debussy has appeared long time ago and it is the way nature sounds in particular works of the composer that fascinates choreographer the most. It is sort of forms and not people, relationships or events that  rise up in Duato's ballets on music by Debussy. According to the choreographer, "Duende" is almost a sculptural work, it is a body, which follows the melody.

The word "Duende" means "elf", the one of those that takes away scattered toys while the kids are asleep but sometimes naughty little children are called the same. On the other hand, "duende" can be also translated as "charm", " fascination ", "charismata",  the magic, which some people eradiate. In Andalusia it is said that "duende" exists in flamenco, but it can hardly be explained in another language. We can say that flamenco’s "duende" is a special magic that is specific in the same as the heart of African music.

Nacho Duato signed his first professional contract with the Cullberg Ballet in Stockholm in 1980 and a year later Jiří Kylián brought him to the Nederlands Dans Theater in Holland, where he was quickly assimilated into the company and its repertoire. In recognition of his achievement as a dancer, Duato received the Golden Dance Award in Schouwburgen, Netherlands in 1987. Duato’s natural talent as a dancer led him to begin exploring choreography, and his first attempt at it in 1983 turned into a major success: Jardí Tancat , set to Catalanan music by Maria del Mar Bonet won him the first prize at the International Choreographic Workshop in Cologne. In 1988 Nacho Duato was named Resident Choreographer for Nederlands Dans Theater alongside Hans van Manen and Jiří Kylián.

In 1995 he received the title of Chevalier dans l’Ordre des Arts et des Lettres, presented annually by the French Embassy in Spain.

The Spanish Government awarded him the Golden Medal for Merit in the Fine Arts in 1998.

He won the Benois de la Danse at the Stuttgart Opera, one of the most prestigious international awards for choreography, presented by the International Dance Association for Multiplicity. Forms of Silence and Emptiness in April of 2000. In 2003, Duato became the winner of Spain’s National Dance Award, in the Creative category.

In 2010, he was awarded with the Chile Arts Critics Circle Prize and his choreography Na Floresta was nominated for the Golden Mask, Russia’s critics’ circle highest award.

Nacho Duato had been the Artistic Director of Compañía Nacional de Danza since June of 1990, when he was invited to take the position by the Instituto Nacional de las Artes Escénicas y de la Música of the Spanish Ministry of Culture. In 2010, he celebrated his XX Anniversary with the Compañía Nacional de Danza, leaving in July of that year. In July 2010, Nacho Duato announced that he would lead the Mikhailovsky Ballet as company’s Artistic Director from 1 January 2011.

His ballets form part of the repertoire of the most important companies around the world.