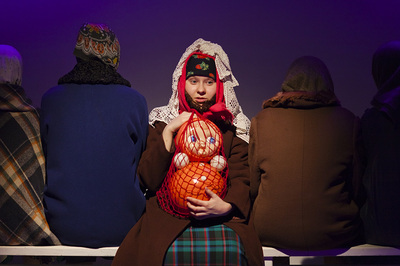 The show “Babushki” of the Moscow theatre «Praktika» will become the part of the festival program of actual art.

«Babushki» directed by Svetlana Zemlyakova is a mosaic of real villagers’ stories collected by the workers of Russian Language Institute of the Russian Academy of Science.

The play is performed in the style of verbatim theatre: a journalist from the big city interviews old women who live in the countryside. Customs, traditions, songs – the life of the Russian village of the XX century that is so far away from us, people who live in the megapolis of the XXI century.

The old women are played by young actresses, all graduates of Oleg Kudryashov’s GITIS acting studio.

The play is based on the book “Russian Village in the Stories of Its Residents” edited by Russian language scholar Leonid Kasatkin and audio and video materials collected by workers of V. V. Vinogradov Russian Language Institute of the Russian Academy of Science.

«Praktika» is a theatre venue and company focused on contemporary drama. It opened on October 7, 2005 with a mission to reflect modern reality in all its complexity and to address the questions that are of burning importance for the contemporary society.

«Praktika» was established by Eduard Boyakov as a theatre in search of contemporary topics and stories, of the present-day language, of a new theatre style, a new generation of playwrights and directors working with contemporary plays.

«Praktika» is intended to become a place of intellectual, emotional and spiritual quest, a unique cultural centre, where theatre, cinematography, video art can merge into something completely different and unique. Master-classes, seminars, trainings, a movie club, a gallery of contemporary art - all these projects address to new audience.

The individual and the state, ethnos and urbanism, wars and religion, ethics and amoralism are among the topics that are in the spotlight of its attention. Theatre partners are the new generation of directors and playwrights: Ivan Vyrypaev, the Durnenkov brothers, Juri Klavdiev, Viktoria Nikiforiva, Mikhail Ugarov, Ruslan Malikov, Viktor Ryzhakov, Ksenia Peretruhina.