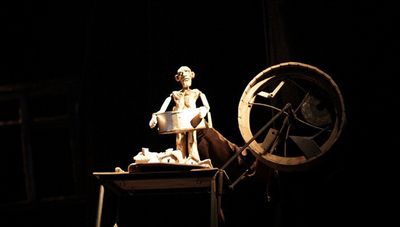 Performance "Chevengur" does not speak about  communism which Platonov's odd fellows created but it engages a spectators into visual and philosophical dialogue about a man who wants to be happy and who faces difficulties in understanding the twists and turns of life and historical whirl. It is a play about human fragility, faith and search for happiness.

More than 50 puppets of different systems are involved in "Chevengur" and the incredible sharpness and expressiveness of the puppets make Platonov’s  text tangible. The techniques bordering on screen still are used in the play, sandy-gray, yellow, blue, black light, shades of red light play an important role in the perfomance.

Oksana Dmitrieva graduated from Dnepropetrovsk Theatre and Arts college as a puppet theater actress after which she worked in the Crimea Puppet Theatre where she played more than 30 roles and was awarded the title of Honored Artist of Crimea. In 2006 she graduated from Kharkov University of Arts named after  Kotlyarevsky received the specialties  of "drama" and "Puppet theater director".

Since 2007 she has been working at Kharkov State Academic Puppet Theater named after V. Afanasyev.  She is teaching at the stage direction course at Kharkov University of Arts.

Oksana Dmitrieva considers her work at the theater as a success in his life as the troupe of Kharkov Puppet Theatre is the strongest in Ukraine, and the theater with more than 70 years history is known as a leader even far abroad.

In 2008 Oksana Dmitrieva won the Municipal Award as best director of the year (play "The Magic Ring"), with "Thumbelina" performance she became the winner of the International Festival of Puppet Theatre in Moscow (2008), the laureat of the International Festival- Biennale of puppet and synthetic theaters "KUKART-IX »(2009, St. Petersburg," Simple stories” by Anton Chekhov.