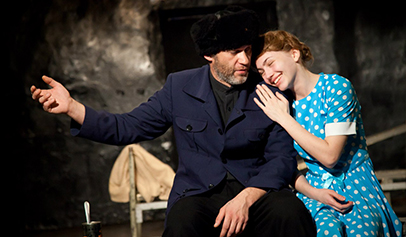 "Fro" performance, based on the short story by Andrey Platonov, was created by a young director Alexander Ageyev within the frames of  the  directing experimental platform at Chekhov center, which became part of the Far East Theatre Forum 2012.

The performance by Alexander Ageyev differs from the traditional interpeting of "Fro". The main character perfoming by a young actress Maria Rakovskaya lacks of bright voluptuousness. And her stimulus is not a demanding feminine nature but a strong feeling of emptiness due to the absence of the closest person for  her. The play is filled with fresh images and original director's catchings, subtle irony and deep sadness.

Sakhalin International Theater Center named after A. Chekhov (Chekhov center) traces its history to 1930, when the first professional theater appeared in Alexandrovsk-Sakhalinsk, which later was transformed into Sakhalin Regional Drama Theater in 1947.

In 1992 the center received the status of Sakhalin International Theater Center named after A. Chekhov (Chekhov Center). Rich repertoire that includes classical and contemporary theatrer drama, performances for the hole family earned him a reputation as a cultural center of the regional capital. Chekhov Theater Center has participated in a number of international and Russian theater festivals.