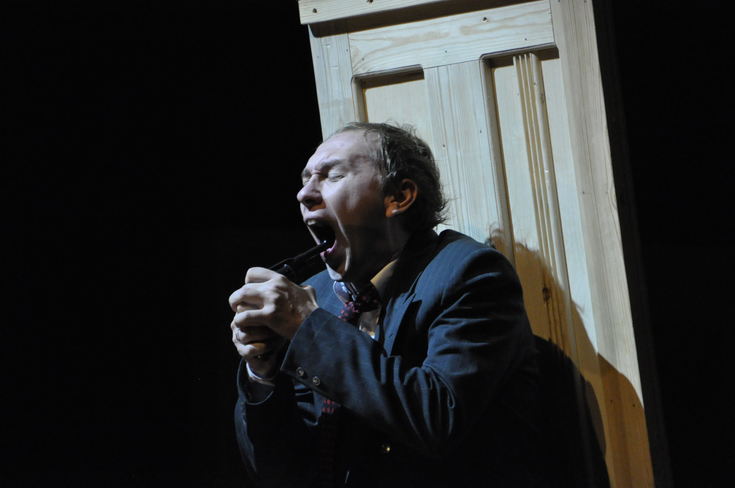 Nikolay Robertovich Erdman (1900-1970) was a Soviet playwright, poet, script writer. He worked on the screenplays for the “Jolly Fellows” and “Volga-Volga” and other movie pictures that are now Soviet cinema classics. His first play “The Mandate” in the 20s of the last century was successfully staged all over the country. His second play for theater, “The Suicide”, a comedy, written in 1928 was highly praised by K.S. Stanislavsky and V.E. Meyerhold who even wanted to stage it but Soviet censors didn’t allow the play to be produced in the theater until 1982.

Action of the play takes place in Moscow in 1920s. In the center of the story is a comic paradox about lost and bewildered man, Semyon Semyonovitch Podsekalnikov, who finds a new meaning of this life after his households get the idea that he wants to kill himself. Before that no one cared about him and now Podsekalnikov is the center of attention surrounded by attendance and courtship and a whole line of bidders is at his doors. The only problem is that all of them can’t wait to see him dead… A brilliant comedy writer and playwright in “The Suicide” N. Erdman was able to bring true tragedy and lyrics into the contrapuntal scenes with masks of Everymen, humanity notes appeared in the satirical play.

The Saratov Kiselev Academic Youth Theater is a unique phenomenon in Russian culture. This was the world’s first theater for children opened on October 4, 1918. The fairytale “The Blue Bird” by Maurice Maeterlinck was performed at that time. The theater was born in a country ravaged by the ruin of war, poverty and starvation to support children spiritually, children who were deprived of their childhood to help them to survive. The names of Abram Room, Leonid Dashkovsky, Leonid Brausevich, Alexandr Solomarsky are preserved in the history of the theater history – the names of sincere followers of theater art for children, people who dedicated their creative activity to the most challenging, demanding, irrepressible and the most grateful audience.

At present, the theater occupies three stages situated in two separate buildings. In the theater playbill there are thirty shows, and each year audiences view no fewer than five premiers. Performances based on the works of Chekhov, Gorky, Pushkin, Fonvizin, Dostoevsky, Gogol, Shakespeare, Gauf, Meterlink, and Williams are very popular among all spectators, adults and children alike. Each year the Kiselev Youth Theater offers up to 400 performances, which are attended by more than 150,000 spectators. Each month children from boarding schools, orphanages, low-income families, as well as abandoned and disabled children attend the theater free of charge.

Today the Kiselev Youth Theater strives to continue and support an intimate dialogue with its young viewer, to awaken “kind feelings”, to boost self-esteem, to preserve light and hope in the hearts and souls of those people who are at the very beginning of life’s journey.