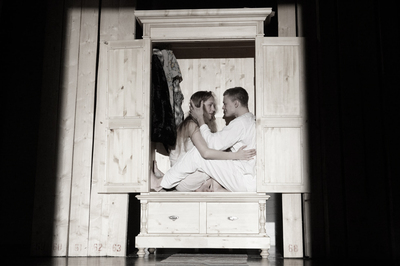 In the space of “The Potudan River” there is neither a stage, nor a curtain, nor the chairs. Along the three walls of a small hall there are plain unpainted stools with numbers – a little more than thirty of them. Along the fourth wall there are long unplaned boards. There is also a river: the “trench” in the brick wall seems to have been waiting for this very production in order to become the riverbed of Potudan.

“The Potudan River” deals with the aspects which are usually considered awkward to speak about: it deals with old people's loneliness, with the most intimate relationships between a man and a woman. It also deals with the unimaginable difficulties and simple joys of the post-war life, with the family problems of two young people. And with the despair that one is unable to hide but can only disappear together with it...

The vital in this production is what is behind the words and in between. The director transferred much of Platonov's text into the direct speech as it turned out that the intimate space doesn't allow to say those words in third person.

The Potudan River is a prize winner of the Golden Mask award in the nominations of Best Small Scale Production and Best Lighting Designer.

The Theatre Art Studio is the youngest theatre in Moscow, established in 2005. Its repertoire is based on rare, little known works by world classical authors. Eight of the nine productions are based on prose. Sergey Zhenovach is the artistic director of the theatre. His director's work is distinguished by attention to the author's words, an urge to penetrate into the author's message and his perception of the world, and then to reproduce it with theatrical means of expression. Sergey Zhenovach tends to gather an ensemble of like-minded people. Working capability and a “family-like” production style are distinctive marks of his director's style.

Among numerous accolades, the company’s productions have received 11 nominations for Russia’s Golden Mask National Theatre Award, a prize they went on to win six times. Several of the company’s productions have been presented in The Chekhov International Theatre Festival: The Boys and As you like it (2005), The Gamblers (2007), The Potudan River (2009) and Three Years (2010).

The Theatre Art Studio presented its productions in numerous Russian cities as well as in US, Poland, Korea, Latvia, Lithuania, Estonia.

In March 2008 The Theatre Art Studio obtained a building of its own in Stanislavsky street. The building of the theatre can boast a unique history. In the 19-th century here there used to be a gold thread factory famous all over Russia. The factory belonged to the Alexeev family, the very family where in 1863 there was born Konstantin Sergeevich Alexeev, well-known in the world art as Stanislavsky. In 1904 Stanislavsky became the director of the factory and opened a theatre on its territory where there were presented productions performed for workers. The theatre building, preserved and renovated, became a home for the Theatre Art Studio.

In 1988 he graduated from the Directors’ department of GITIS (P.N. Fomenko’s workshop) and started his teaching activity at the Directors’ chair. Since 2001 S. Zhenovach has been professor and the artistic director at the workshop of joined directors’ and actors’ studies at the Directors’ chair in the Russian Academy of Theatre Arts (GITIS). In 2004 he became Head of the Directors’ chair in the Russian Academy of Theatre Arts.
From 1988 to 1991 S. Zhenovach worked as a director in the theatre-studio “Chelovek” where he staged such productions as “Pannochka” by N. Sadur after N. Gogol’s “Viy” (1988) and “Illusion” by P, Corneille (1989).
From 1991 to 1998 S. Zhenovach worked as a director in the Malaya Bronnaya Theatre (since 1996 – as the director-in-chief). Among the productions of those years one can name “King Lear” by W. Shakespeare (1992), and a theatre trilogy “The Idiot” (1995) after F. Dostoyevsky’s novel (awarded with the Golden Mask in the nomination of Best director).
In 1993 the repertoire of the newly founded P. Fomenko’s Workshop Theatre embraces such productions staged by S. Zhenovach together with P. Fomenko’s students from GITIS as “Vladimir, 3-rd Class” after N. Gogol (1991) and “The Sound and the Fury” after W. Faulkner (1993). In 1996 the director staged at P. Fomenko’s workshop a production entitled “A Month in the Country” after I.S. Turgenev’s play. The production participated in the Avignon theatre festival in 1997.
In 1994, 1996 and 1997 S. Zhenovach goes to Norway to stage productions after plays by A.P. Chekhov, H. Ibsen and W. Shakespeare.
In 1997 Sergey Zhenovach was awarded the Stanislavsky prize for his director’s skill.
In 2000 the director presents “Woe from Wit” by A. Griboedov in the Maly Theatre. In 2002 he stages a production after a play by Ostrovsky “Truth is Good and Happiness is Better” which won the National theatrical award the Golden Mask (a special prize of the jury for Best ensemble) and the Union of Theatre Workers’ award “The Highlight of the Season”.
In 2004 the director staged “The White Guard” by M.A. Bulgakov in the Moscow Art Theatre. In 2005 he presents “The Imaginary Invalid” after J.-B. Moliere’s play (won the Golden Mask in the nomination of Best large scale performance). In November 2004 S. Zhenovach together with his students from the Russian Academy of Theatre Arts stages “Boys” – a production after 9 chapters from “The brothers Karamazov” by Dostoyevsky. In 2005 the production is included into the out-of-competition programme of the Golden Mask festival and into the programme of the 6-th Chekhov International Festival. S. Zhenovach also won the Crystal Turandot theatre award for his director’s work on this production.
In the spring of 2005 S. Zhenovach together with his graduates from GITIS hosts a festival of graduation productions – “Six plays in waiting for a theatre” – and founds The Theatre Art Studio. Alexander Borovsky becomes the designer in chief, Damir Ismagilov is the lightning designer in chief, Grigory Gobernik is the composer while Boris Lubimov acts as the literary advisor.
In December 2005 S. Zhenovach becomes the winner of the Stanislavsky award “For the studio-spirit revival” in the nomination “For the development of theatre pedagogy”. In 2006 the production “Boys” is double-nominated for the Golden Mask award – as the best small-scale performance and best director.
In 2006-2009 in The Theatre Art Studio together with a number of like-minded creative people S. Zhenovach stages such productions as “A Family in Decline” after N. Leskov (awarded with the Golden Mask in 3 nominations: Best director and Best small-scale production, Best Actress), 2006; “Gamblers” after N. Gogol, 2007; “The battle of Life” after Ch. Dickens (won the Golden Mask in the nomination of Best small-scale production), 2008; “The River Potudan” after a short story by A. Platonov, 2009 (won the Golden Mask in the nomination of Best small-scale production); “Three years” after a story by A. Chekhov, 2009, “Notebooks” after A. Chekhov, 2010; "Brother Ivan Fyodorovich", after F.Dostoevsky, 2011.
Sergey Zhenovach’s style is distinguished by his attention to the author’s text, search for the theatrical potential of Russian and international prose.
Share
Programme