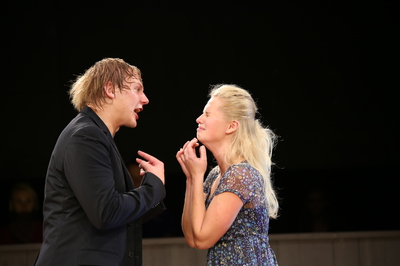 On stage Marika Vaarik and students from Theatre academy

Production by Ene-Liis Semper and Tiit Ojasoo is about becoming and being an human being. How far can you go to learn something completely new? Yes we know that learing is a painful process.  In every second you have to be ready to admit your incapibility or fecklessness... Is it possible at all to focus on something really deeply without any distractions?

Theatre NO99 was founded in 2004 and produced its first play in 2005. The theatre has a permanent 7-member troupe of actors. Three to four new plays are produced each season. Tiit Ojasoo-Ene-Liis Semper and the troupe often cooperate to create plays by improvising scenes and texts using the ideas of the directors as reference points. The play ultimately takes shape through these improvisations. Such plays figure prominently in the theatre’s repertoire

Tiit Ojasoo and Ene-Liis Semper have been working together as directors for the past eight years. During that period, they have brought 20 productions to the stage. Together they are the founders, creative directors and the only in-house directors of NO99 Theatre. They have repeatedly earned awards for Estonia’s best director, best stage production and best stage designer.

The students showed great discipline, teamwork and predictable energy in what without translation seemed little more than a series of powerful rehearsal room exercises, but it will be interesting to discover how it is received by the Russian audience for whom it is destined.