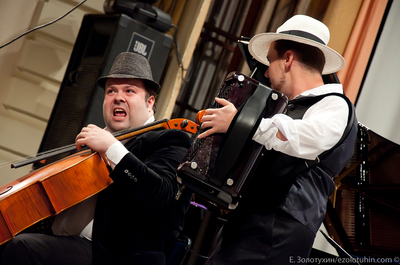 Russian cellist Borislav Strulev has been fascinating audiences on some of the world’s most prestigious stages since his U.S. debut at the Kennedy Center in 1993 arranged on initiative of Isaac Stern, Former World Bank President James Wolfensohn and Byron Janis. His charismatic personality, a virtuosic technique and extraordinarily large and beautiful tone have combined with the mature sensitivity of his interpretations to ensure his place amongst the most exciting young instrumentalists to emerge from Russia in recent years. Critics call him a “soloist ... with a rich, singing tone” - The New York Times, The San Francisco Chronicle said of Mr. Strulev he “boasts an enormous, gripping sound, full of bright colors and effortless power; when he plays he commandeers the sonic spotlight with ease.” Associated Press wrote ''cellist Borislav Strulev, channeling no one, or perhaps God.''

Borislav Strulev began to play the cello at the age of 7 and studied at Moscow’s Central School of Music. Mr. Strulev was a first-prize winner at the All-Russia Young Artists Competition in Moscow in 1992 and became a laureate of International Charity Foundation “New Names” as well as he received the Salon de Virtuosi Arthur W. Diamond Fellowship Grant at Steinway Hall in New York. He was invited to Manhattan School of Music on full scholarship by Byron Janis and Marta Casals Istomin. He has participated in master classes with Mstislav Rostropovich, Yo-Yo-Ma, Lynn Harrell, David Geringas, Philippe Muller, William Pleeth, Marta Casals Istomin, Marion Feldman and Valentin Berlinsky of the Borodin Quartet.

As a recitalist Mr. Strulev had his Carnegie Hall debut in 1999 playing with legendary pianist Byron Janis. He has also been heard at Kennedy Center in Washington D.C., Kravis Center, Van Wezel Hall, Auditorio de Madrid and Suntory Hall in Tokyo.
As a musical director he curated and performed at special event for the "Day of Russia" in New York celebrating 200th anniversary of Russian/American diplomatic relations. He become a music director for a Concert Hall ‘’New Millennium’’ in New York. Additionally he took part in 6th Annual “Russian Rhapsody” in London.

Mr. Strulev play a fine cello by the italian master Luigi Piattellini, Florence (1777) generously loaned to him by Dmitry Gindin.

Aydar Gaynullin is world famous button accordion player, well-known vocalist and composer, member of the Cinematography Academy. He was awarded National Cinematographic Award “Nika” and National Prize of Cinema Press and Critics “White Elephant” for composing music to the film “Euphoria” by Ivan Virypaev, prize in the nomination “Best Film Music” of the XX Open Russian Cinema Festival “Kinotavr” (Sochi 2009) for the film “Oxygen” by Ivan Virypaev. Aydar is a winner of 18 international accordion and button accordion player contests including “World Cup” in London in 2001. Aydar’s music can be heard in the best concert halls of the world: Great Hall of the Berlin Philharmonics, Gaveau Hall Paris, Wigmor Hall London, Concertgebouw Amsterdam, Kennedy Center Washington, Moscow International House of Music, State Kremlin Palace and others.

Aydar was born on January 12, 1981 in Moscow. He has started to play button accordion since he was 8 in J.S. Bach Children Musical School #21 (Professor T.S. Krupchanskaya). In 1994 Aydar won the award of Russian Fund of Culture and international Association of World Funds “New names” In 1996 entered A.G. Shnitke Moscow Musical College (Professor A.E. Ledenev), which he graduated in 2000. Same year he was accepted to Gnessins’ Russian Music Academy in the class of Professor F.R. Lips. In 2005 he graduated with honors and started the Assistantship in the Academy (Professor F.R. Lips). He also entered Hanns Eisler Berlin High School of Music (Professor Gudrun Wall).

In 2003 for the outstanding art of paying button accordion Aydar Gaynullin was included to the President’s Golden Book of Talents of Russia. Same year the musician received scholarships from Mstislav Rostropovich, Fridrich Lips and Russian Performing Arts funds. In May 2003 Aydar was awarded the Order of Honorable Member of Kaunass Conservatory (Lithuania). In 2007 Aydar was awarded governmental order Young Gift of Russia and award Best of the Best. Repeatedly participated as a jury member in prestigious Russian and international instrumental performance festivals. Permanent participant of musical festival Crescendo.

In the park of the Ramon castle the viewers will hear the program of works by Argentine composer Astor Piazzolla who revolutionized the traditional tango into a new style as well as the works of his friend and follower Richard Galliano and Aydar Gainullin.