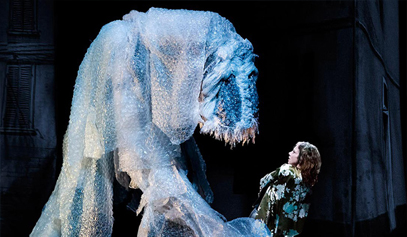 Conceived and directed by VICTORIA THIERRÉE-CHAPLIN

with Jaime Martinez and Antonin Maurel

“The Chaplin-Thiérrée family with their strong genes, outward and artistic likeness and burlesque theatre backgrounds invariably produces very special, incredibly touching, stunning and detached performances. ‘Murmures des murs’ submerges the viewers into the personage’s weird, flickering and poetic inner world. This creature who gaze expresses amazement and naïveté animates inanimate objects, makes the walls talk and turns cardboard into monsters… The walls acquire the history. With the help of cleverly designed sets and anonymous assistants Aurelia with perfect elegance reveals to us the mysteries of the walls <…> The actress speaks about the past with goof-natured humor and nostalgia. She demonstrates striking inventiveness when submerging us into the other worlds. In this production burlesque is neighboring on circus and dance. It is a harmonious action combining spiritual purity, freshness and creativeness”.

In 1970, Victoria Chaplin met actor and director Jean-Baptiste Thierrée who was dreaming of founding a new kind of circus with Le Cirque Bonjour.

In 1971, Le Cirque Bonjour was invited to Festival dʼAvignon and started a tour in France starring Victoria.

Victoria and Jean-Baptiste Thierrée then started working on a very personal approach of circus that leaded to Le Cirque Imaginaire : both on stage, with only their two kids Aurélia and James. They toured all over the world until they created more recently Le Cirque Invisible.

Victoria and Jean-Baptiste are now considered as ones of the main artists who invented the «new circus». In 2003, Victoria Thierrée-Chaplin conceived LʼOratorio dʼAurélia starring Aurélia Thierrée that toured until 2011, when Murmures des murs was premiered.

Aurelia Thierrée started performing as a child in her parentsʼ shows Le Cirque Imaginaire and Le Cirque Invisible. She has worked in cabaret in Berlin, toured with the Tiger Lillies in their show Tiger Lilies Circus, and appeared in films, working with directors Milos Forman and Jacques Baratier. Her first stage show, LʼOratorio dʼAurélia, opened in 2003 and has played to sold out houses across the world, touring Europe (including Lyric Theatre in London and Theatre de la Ville in Paris), USA (including  Berkeley Rep, La Jolla Playhouse, McCarter Theater and American Repertory Theatre). Murmures des murs is her second full length stage show and collaboration with director/creator Victoria Thierrée-Chaplin. It was premiered in France  in 2011  and  has performed in France, Italie and Brazil.

Jaime Martinez was born in San Juan Puerto Rico and raised in Columbia South Carolina where he began his training with Ann Brodie and Naomi Calvert. He furthered his training on a Nancy Reynolds scholarship at the North Carolina School of the Arts, as well as scolarships in New York City from the American Dance Machine, and in North Carolina at the American Dance Festival. He was a founding member of the Parsons Company in 1987 and has staged numerous works by David Parsons on such distinguished companies as Ballet du Rhin, Ballets Jazz du Montreal, Carte Blanche Dance Company of Norway, Ballet National de Nancy, New York City Ballet, Milwaukee Ballet, and Roland Petit Ballet National de Marseille. He has also worked with : Pearl Lang, Ruby Shang, Douglass Wright, Uris-Barr and Dancers, Robin Becker and Pooh Kaye's Eccentric Motions. He is a recipient of a New York Dance and Performance "Bessie" award for sustained achievement.Jaime Martinez has performed in LʼOratorio dʼAurélia from 2003 to 2011 and created the role in Murmures des murs.

La Compagnie des Petites Heures was founded in 1986 par Frédéric Biessy. He was joined in 2000 by Frédéric Rousseau, in 2009 by Caroline Jude and in 2011 by Sonia Da Cruz and Clémence Droit. It is thought as a «house» where artists of performing arts (directors, choreographers, puppeteers…) can conceive  and  develop their project with artistical, technical and financial support. Famous or young artists, for large audience or highly specialized projects, simple or complicated organizations : all that matters is the high quality of the artistical aim. Therefore, La Compagnie des Petites Heures is proud to work with artists such as Victoria Thierrée-Chaplin and Aurélia Thierrée, Luc Bondy, Bartabas/Zingaro, Fabrice Murgia, Dan Jemmett, Yeung Faï, Kristian Lupa or Arpad Schilling. La Compagnie des Petites Heures is also the partner of  the  most important  cultural organizations or events all over the world such as: Théâtre Vidy in Lausanne ; Théâtre de la Ville in Paris ; MC93 in Bobigny ; Théâtre  Royal in Namur ; International Theater Festival Tchekhov in Moscou ; Printemps des Comédiens Festival in Montpellier ; Les Nuits de Fourvière Festival in Lyon; cultural  programmation  of  Pavilion  of  France in  Expo  Aïchi  2005  (Japan)  and  Expo Zaragoza 2008 (Spain); cultural programmation of French Institutes in Singapour and Sydney.