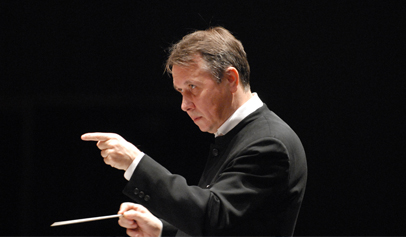 The Russian National Orchestra has been in demand throughout the music world ever since its 1990 Moscow premiere. Of the orchestra's 1996 debut at the BBC Proms in London, the Evening Standard wrote, "They played with such captivating beauty that the audience gave an involuntary sigh of pleasure." More recently, they were described as "a living symbol of the best in Russian art" (Miami Herald) and "as close to perfect as one could hope for" (Trinity Mirror).

Gramophone magazine called the first RNO CD (1991) "an awe-inspiring experience; should human beings be able to play like this?" and listed it as the best recording of Tchaikovsky's Pathétique in history. Since then, the orchestra has made more than 75 recordings for Deutsche Grammophon and PentaTone Classics, distinguishing the RNO as the only Russian ensemble with long-standing relationships with these prestigious labels, as well as additional discs with many other record companies. Conductors represented in the RNO discography include Founder and Music Director Mikhail Pletnev, Vladimir Jurowski, Kent Nagano, Alexander Vedernikov and Paavo Berglund.

The RNO's recording of Prokofiev's «Peter and the Wolf» and Beintus's «Wolf Tracks», conducted by Kent Nagano and narrated by Sophia Loren, Bill Clinton and Mikhail Gorbachev, received a 2004 Grammy Award, making the RNO the first Russian orchestra to win the recording industry's highest honor. A Spanish language version narrated by Antonio Banderas was released in 2007, following a Russian version narrated by actors Oleg Tabakov and Sergei Bezrukov, with a Mandarin edition following in 2011.

In 2008, a panel of international critics assembled by Gramophone named the Russian National Orchestra as one of the world’s top orchestras.

The orchestra's Shostakovich cycle on PentaTone Classics is widely acclaimed as “the most exciting cycle of the Shostakovich symphonies to be put down on disc, and easily the best recorded.” (SACD.net)

A regular visitor to the Schleswig-Holstein, Gstaad and Rheingau festivals, the RNO is also the founding orchestra of Napa Valley Festival del Sole, Festival of the Arts BOCA in Florida, and the Singapore Sun Festival, and resident orchestra for multiple seasons of the Tuscan Sun Festival in Cortona, Italy. The RNO launched its own annual festival in 2009, held each September in Moscow.

The RNO is unique among the principal Russian ensembles as a private institution funded with the support of individuals, corporations and foundations in Russia and throughout the world. In recognition of both its artistry and path-breaking structure, the Russian Federation recently awarded the RNO the first ever grant to a non-government orchestra.

Mikhail Pletnev is an artist whose genius as pianist, conductor and composer enchants and amazes audiences around the globe. His musicianship encompasses a dazzling technical power and provocative emotional range, and a searching interpretation that fuses instinct with intellect. At the keyboard and podium alike, Pletnev is recognized as one of the finest artists of our time.

Pletnev was Gold Medal and First Prize winner of the 1978 Tchaikovsky International Piano Competition when he was only 21, a prize that earned him early recognition worldwide. An invitation to perform at the 1988 superpower summit in Washington led to a friendship with Mikhail Gorbachev and the historic opportunity to make music in artistic freedom.

In 1990 Pletnev formed the first independent orchestra in Russia's history. Under his leadership, the RNO achieved in a few short years a towering stature among the world's orchestras. Pletnev describes the RNO as his greatest joy and today serves as its Artistic Director and Principal Conductor. In 2006, he launched the Mikhail Pletnev Fund for the Support of National Culture, a non-profit organization that supports major cultural initiatives and projects, including the RNO's annual Volga Tour and, in collaboration with Deutsche Grammophon, the Mikhail Pletnev Beethoven Project.

As a solo pianist and recitalist, Pletnev appears regularly in the world's music capitals. His recordings and live performances have proved him to be an outstanding interpreter of an extensive repertoire. The London Telegraph remarked, "from Pletnev's fingers and brain come ideas that vitalise the music and make it teem with freshness and wit. [He] made the music positively leap for joy." The Times describes his playing as "born of a prodigious virtuosity of imagination outrageous in its beauty."

Pletnev’s recordings have earned numerous prizes, including a 2005 Grammy Award for the CD of his own arrangement, for two pianos, of Prokofiev’s Cinderella, recorded with Martha Argerich and Pletnev at the keyboards. He received Grammy nominations for a CD ofSchumann Symphonic Etudes (2004) and for his recording of Rachmaninov and Prokofiev Piano Concertos No. 3 with the RNO and conductor Mstislav Rostropovich (2003). His album of Scarlatti’s Keyboard Sonatas (Virgin/EMI) received a Gramophone Award in 1996.BBC Music Magazine called the recording "piano playing at its greatest... this performance alone would be enough to secure Pletnev a place among the greatest pianists ever known." In 2007 he recorded all of Beethoven's piano concertos with Deutsche Grammophon, and the recording of concertos 2 and 4 was named "The Best Concerto Recording of 2007" by the Tokyo Record Academy.

As a composer, Pletnev's works include Classical Symphony, Triptych for Symphony Orchestra, Fantasy on Kazakh Themes and Capriccio for Piano and Orchestra. His unrivalled transcriptions for piano of Tchaikovsky's Nutcracker Suite and Sleeping Beautywere selected, along with his performance of Tchaikovsky's Second Piano Concerto andThe Seasons, for the 1998 anthology "Great Pianists of the 20th Century" (Philips Classics).

An advisor on Russia’s Cultural Council, in 2007 Pletnev was awarded a Presidential Prize for his contributions to the artistic life of the country. Pianist, conductor, composer and cultural leader — all are significant facets of Mikhail Pletnev's life as an artist. Yet he considers himself, simply, a musician.