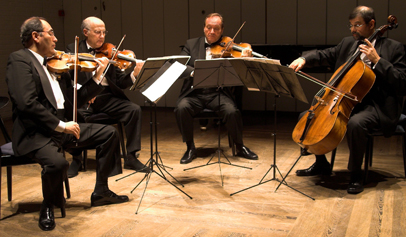 Founded by experienced chamber musicians steeped in the standards and style of the classic Russian school, the Kopelman Quartet carries forward a rich inheritance of technical excellence, lyricism, grace and musical integrity.

Mikhail Kopelman, Boris Kuschnir, Igor Sulyga and Mikhail Milman all graduated from the Moscow Conservatoire in the 1970’s, this institution’s golden age, when the students regularly worked with musicians and teachers such as David Oistrakh, Boris Belenky, Yuri Yankelevich, Fyodor Druzhinin,  Dmitri Shostakovich, Mstislav Rostropovich and Natalia Gutman.  These strong musical influences have remained with the members of the Kopelman Quartet, even though they pursued individual careers for twenty-five years before founding the quartet in 2002.

Mikhail Kopelman, first violin, was the renowned leader of the Borodin Quartet for twenty years, and was awarded the Royal Philharmonic Society Award and the Concertgebouw Silver Medal of Honour.   Boris Kuschnir, second violin, is a distinguished teacher whose pupils include Julian Rachlin and Nikolai Znaider. Igor Sulyga, viola, played for twenty years with Vladimir Spivakov, in the Moscow Virtuosi Chamber Orchestra and in his string quartet. As founding members of the Moscow String Quartet, both Boris Kuschnir and Igor Sulyga worked with Dmitri Shostakovich on his late quartets. Mikhail Milman, cello, was for twenty years principal cellist of the Moscow Virtuosi and collaborated frequently with the Borodin Quartet in concerts and recordings.

Now established as significant chamber ensemble, the quartet has played at many major international venues, including the Musikverein, Vienna, and the Dom Muziki, Moscow, and appears regularly at venues such as the Concertgebouw, Amsterdam and  the Wigmore Hall, London.  Chamber muisic partners have included Elisabeth Leonskaja, Mischa Maisky and Julian Rachlin.

The Kopelman Quartet is recording a Shostakovich Plus series for Nimbus Records and has also recorded  for Wigmore Live, the Wigore Hall’s own label.  Recorded repertoire includes music by Shostakovich, Prokofiev, Myaskovsky, Tchaikovsky and Schubert; future releases on Nimbus include the Weinberg Piano Quintet, due for release in 2009.

The Kopelman Quartet has given concerts in the United Kingdom, Spain, Portugal, Austria, Italy, the Netherlands, Belgium, Germany, Denmark, Sweden, Switzerland, Slovakia, Cyprus, the United States, Canada and Russia; festivals in which they have played include the Edinburgh International Festival,  the Valladolid Festival,  the Zurich Festival, the Colmar Festival, Prague Spring Festival and the Ravinia Festival in the United States.  Future engagements include  their rerturn to the Royal Palace, Madrid, the Wigmore Hall, the Concertgebouw and the Palais des Beaux-Arts in Brussels, as well as performances at other venues in Europe, Canada and the United States of America.