There have been changes in the theatrical and musical schedule of the tenth Platonov Arts Festival: some events will not take place, but new bright names and projects have appeared in the programme.

▪ The Russian programme has been preserved and expanded. Earlier we added two new performances to it - the fresh premiere of Yuri Muravitsky at the Moscow Taganka Theatre "Le Tartuffe. Comedy" and a performance by the famous British director Declan Donnellan at the Moscow Pushkin Drama Theatre "The Knight of the Burning Pestle", which was included in the Long-list of the "Golden Mask" -2020.

▪ For the first time, the Platonov Festival will host the "Voronezh Case" – the showing of the brightest new performances of Voronezh theatres. It is assumed that the performances will be watched not only by the Voronezh spectators, but also by specially invited guests - the festival curators and the press.

▪ The international programme of the festival has undergone changes.

This year, due to the lack of air service between Russia and most of the countries, our foreign participants will not be able to fly to Voronezh. However, the international theatrical programme of the festival will still take place - only in the format of video screenings. Objective circumstances forced us to make changes to our foreign programme and at the same time allowed us to expand its content - for the first time at the Platonov Festival, a block of modern opera performances will be presented.

All video screenings will take place at Venue 1900 (Vinzavod space), which will become the International Festival Centre during Platonov festival.

The screenings will be free by prior registration on the Timepad platform. The number of seats is limited.

Since Voronezh does not have a modern, well-equipped opera stage, so far the Platonov Festival has not had the opportunity to bring and show the achievements of the world theatre in the genre of opera as part of its programme. This year, the pandemic gave the Platonov Festival the opportunity to turn to the programme of the famous Festival in Aix-en-Provence. Together with the French Institute in Russia, we will show the Voronezh audience some of the best performances of Aix-en-Provence of the last ten years.

The audience was very much looking forward to seeing the works of foreign directors and choreographers announced in the programme of the anniversary Platonov festival, and they did not return tickets until the last day, believing that the showings would take place. Specially for our loyal viewers, we have tried to preserve the names of these directors in the video screening programme.

Thus the program will include performances by Christiane Jatahy, Alvis Hermanis and Angelin Preljocaj. Viewers who have previously purchased tickets for the performances of these directors and choreographers will have priority right to sign up for the video screenings.

If you bought tickets for the performance "What if They Went to Moscow?", you can use the priority right to register for the video screening of "Julia" until August 23rd. When you return the tickets at the ticket office, the cashier will offer you an invitation card. If you bought tickets online, you will receive a link to pre-register by email. From August 24th, all seats will be made available for registration for the general audience on the Timepad platform. The number of seats is limited.

If you have purchased tickets for the performance "Gravity", you can use the priority registration right for the "Snow White" video screening until August 23rd. When you return tickets at the ticket office, the cashier will offer you an invitation card. If you bought tickets online, you will receive a link to pre-register by email. From August 24th, all seats will be made available for registration for the general audience on the Timepad platform. The number of seats is limited.

If you bought tickets for the performance "Old Love", you can use the priority right to register for the video screening of "The Government Inspector" until August 23rd. When you return the tickets at the ticket office, the cashier will offer you an invitation card. If you bought tickets online, you will receive a link to pre-register by email. From August 24th, all seats will be made available for registration for the general audience on the Timepad platform. The number of seats is limited. 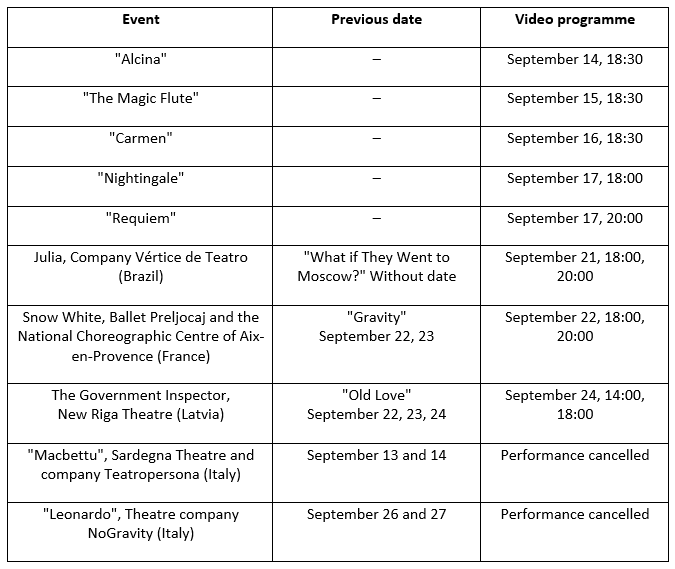 The pandemic also made adjustments to the festival's music programme. Outstanding Russian musicians will perform at the Platonov Festival instead of several previously announced foreign bands and artists.

We keep the formats of concerts, where possible - even the programme of the performances. And of course, we invite leading Russian musicians to participate in the festival.

Among the new events of the classical music programme is a chamber concert, in which 6 musicians - Hayk Kazazyan (violin), Nikita Borisoglebsky (violin), Andrei Usov (viola), Fedor Belugin (viola), Alexander Ramm (cello) and Boris Andrianov (cello) - will play the musical works of Brahms. The concert entitled "Brahms' String Sextets" will take place instead of the performance of the Modigliani Quartet (France).

The duet of Boris Berezovsky (piano) and Nikita Borisoglebsky (violin) will replace musicians from Israel and South Korea - Amihai Grosz and Kim Sunwook - at the Platonov Festival. The new musical union of the virtuoso instrumentalists of our time will present works by Grieg, Catoire, Stravinsky and Kreisler. Both musicians are laureates of the most prestigious music awards, give concerts on the best stages in the world and perform with renowned orchestras. Boris Berezovsky is the initiator, founder and artistic director of the Nikolai Medtner International Festival ("Medtner Festival"), which has been held since 2006 in Moscow, Yekaterinburg and Vladimir. In 2014 he became the artistic director of the "Music of the Earth" festival in Moscow and St. Petersburg.

The concert by Shlomo Mintz will be replaced by a performance by violinist Andrei Baranov - the first violin of the unique string quartet named after David Oistrakh, accompanied by the Symphony Orchestra of the Voronezh Concert Hall. Andrei Baranov is the winner of the 2012 Queen Elizabeth International Competition, the Benjamin Britten Violin Competition in London and the Henry Marteau Competition in Germany, the winner of more than twenty different international competitions, including competitions in Indianopolis (USA), Sendai (Japan), Seoul (South Korea), UNISA (South Africa), competitions of David Oistrakh, Liana Isakadze, Paganini (in Moscow) and many others. He collaborated with many outstanding musicians, including Martha Argerich, Liana Isakadze, Pierre Amoyal, Julian Rachlin, Boris Andrianov. The concert programme remained unchanged: Alexey Shor – "Seascapes" concert for violin and orchestra; Sergei Taneyev - Concert suite for violin and orchestra in G minor, op. 28. The concert will be supported by the International Cultural Fund.

For the first time world opera star Olga Peretyatko (soprano) will perform in Voronezh, accompanied by the Voronezh Academic Symphony Orchestra (chief conductor Igor Verbitsky). Vladislav Sulimsky (baritone) will become her partner on stage, he will replace the Mexican artist Alfredo Daza. Vladislav Sulimsky is a soloist of the Mariinsky Theatre, laureate of many international prizes and competitions, including the Giacomo Lauri-Volpi competition, Elena Obraztsova competition, the highest theatre award of St. Petersburg "Golden Soffit", the national opera award "Onegin", the Casta Diva opera award and many others. As a guest soloist, Vladislav Sulimsky has performed at the Bolshoi Theatre of Russia, theatres in Basel, Malmö, Stuttgart, Riga, Dallas, the Musikverein, at the Edinburgh Festival, the Savonlinna Festival, the Baltic Sea Festival, the St. Margarethen Opera Festival and the Salzburg Festival. The concert programme of Olga Peretyatko and Vladislav Sulimsky "World Opera Stars" includes overtures, arias and duets from classical operas.

The solo concert of one of the most outstanding pianists, laureate of the "Grammy" and "Triumph" awards, as well as the Platonov award, Mikhail Pletnev, will take place unchanged.

Thus, the musical programme of the tenth Platonov Festival looks like this: 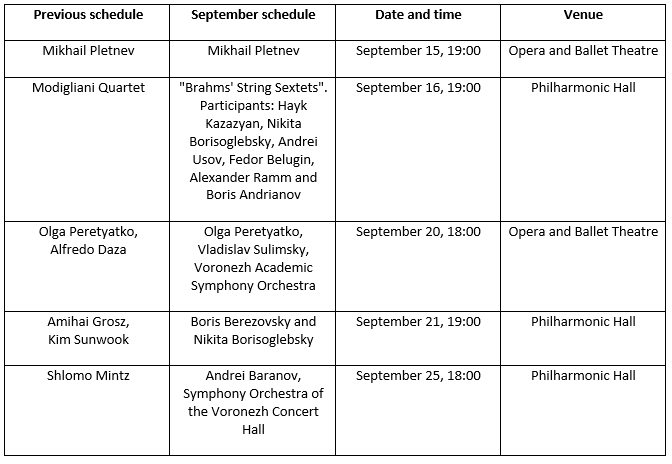 Tickets for concerts of the previous schedule will be valid for alternative concerts of the September programme of the Platonov Festival, with the preservation of the row and seat.

Unfortunately, some of the outdoor events of the Platonov Festival will have to be cancelled. Due to the ban on public events, we were forced to cancel several outdoor events:

Fortunately, we have managed to preserve the traditional Book Fair, which will be held from September 25 to September 27 on Sovetskaya Square and will present to the public the book novelties from more than 100 Russian publishing houses. Within the framework of the book fair, a reading-relay race will be held, in which guests and residents of the city can take part.

To return tickets for events of the foreign programme, you can go to the festival ticket offices:

- Ticket office of the Chamber Theatre.

Please note that when returning tickets paid at the ticket office by non-cash payment, you must have the card with which the payment was made and a cashier's check.

Information on the returning of the tickets purchased at the Event-Hall ticket office (TEC Arena, TEC Moskovsky Prospekt, City-Park Grad, 2 Pushkinskaya St.) can be obtained by calling +7 (473) 257-58-01.