The collaboration of the Platonov Arts Festival and the German theatre company Rimini Protokoll was shown yesterday on the stage of the Moscow Provincial Theatre and became a great success.

“100% Voronezh” was nominated for the “Golden mask”, the main theatre award in the country, in the category “Experiment”.

The show participants, who are heading back home, have already given their comments upon their performance to the journalists.

“The audience joined the wave from the very beginning. They were laughing a lot, expressing their opinion, and we could clearly feel it,” said Anton Pozdnukhov. “The spectators were really grateful. We kept hearing them reacting and we could see their bright eyes. The energy was overwhelming! Mikhail Bychkov told us that we played just amazing. It was really wonderful for us as unprofessional actors to be praised by such an honorable director,” Olga Rudneva remarked.

The social networks’ users are buzzing with curiousity if the additional runs of the performance are going to be organized in their hometown while the Moscow audience are saying that the unusual play has provoked the desire to visit Voronezh.

“We even got standing ovation! There was a heartwarming moment when we needed to light lanterns while playing the scene and suddenly the same light appeared in the audience. It doesn’t even matter if we are going to get the “Golden mask”, what is important for us is that the audience liked the play,” was the artists’ confession. 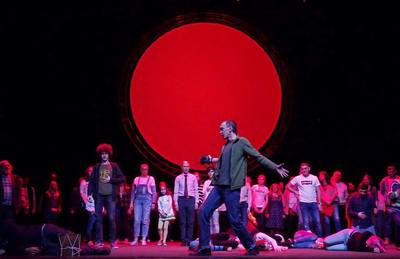 Now we are going to remind you that the performance “100% Voronezh” opened the 8th Platonov Arts festival in June 2018. 100 ordinary city residents participate in the project. They were selected in order to represent the statistical diversity of the city’s population.

The Golden mask award ceremony will take place on April 16th on the Historical stage of the Bolshoi theatre where we will find out the names of the prizewinners.