The Concert of the Platonov Festival in Ramon. Photo: Maxim Laptev

During the June 21st to 23rd, the Institute of the public opinion “Kvalitas” hold a telephone interview with the Voronezh citizens over 18-year-old and asked them to respond to 7 questions.

Do you know, have heard something or hear for the first time that there was Platonov Festival in Voronezh?

44% of the responders said “I know”, 37% - “have heard something”, meaning that recognizability of the event is over 80%. Only 19% of the interrogated said that “first hear” about the Festival.

As the specialists of the “Kvalitas” noticed, “probably there are some limits of the information saturation of the public about cultural events”, but “the number of those who don’t know anything about the Festival has significantly decreased over the years and does not exceed 20% during the last five years.

Did you visit some cultural events within the framework of the Platonov Festival?

The performance “The Old Man and the Sea”. Photo: Andrey Parfyonov

13% of the responders said “visited” and 87% - “didn’t visit”. 13% of the Voronezh population is more than 130 000 people, this number is quite comparable with the official report of the Directorate about the attendance this year (over 100 000 people), and moreover, some people visited more than only one event.

Fillability of the venues of the eighth Platonov Festival was 95% and this means that everything we offered to the audience this year was much-in-demand. 24 500 people visited paid-for performances and concerts, and over 36 000 people were the viewers of the theater parade, 26 000 people visited other free events (meetings with the writers, book fair, lecture and artistic meetings) and 12 thousand people – exhibitions.

The question is for those who missed the Platonov Festival this year: what stopped your from visiting the Festival?

Half of the Voronezh citizens (49,8%) who were not the Festival’s viewers this year, said that they missed it due to the lack of time. The other common reasons were the lack of information (11,8%), absence in the city at that time (11,6%) and health problems (12,2%). It’s noticeable that only 7,2% of the people admitted that it’s not interesting for them.

Who is the Platonov Festival programme for?

39,5 of the Voronezh citizens said that the Festival due to their opinion is for the broad audience of Voronezh. 48,4% said, that it’s more for the narrow group of contemporary art connoisseurs. The rest found it difficult to answer.

The “Kvalitas” specialists noted that “a certain part of the interviewed responders who satiated about the “narrow focus” of the Festival programme, belong themselves to this very group of connoisseurs of contemporary art. So the process of reasoning is about such: “Yes, I’m contemporary art adept and connoisseur and this Festival for me and people like me”.

And reminded that due to the results of another interview of the Institute it was revealed that 72% of the Voronezh citizens identify themselves as cultured people.

To which of the three statements you tend to a greater extent?

The major part of the interrogated (65,2%) agreed that Platonov Festival is a pride of the Voronezh Region, it raises the cultural life of the Region and it should be protected and developed further. 20,2% tended to the formulation “the Festival is needful, but it should be remolded, the programme policy should be changed”. 5,1 said that the Festival is not needed. The rest found it difficult to answer.

Which sources should the Platonov Festival be financed from? 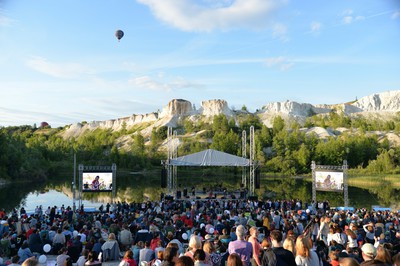 The Institute of the public opinion “Kvalitas” reminded that the budget of the Platonov Festival is being formed from several finance sources. Specialists gave also an example of the most famous Theatre Festival – Avignon Festival which is being financed by the Government and Municipality on 52%. The situation with the Platonov Festival is slightly different – 24% of the budget is from the Regional budget and 12% is from the City one. The rest expenses for the projects’ realization are covered by the means of sponsor and charity contributions, tickets sales and funds participation.

Meanwhile, according to the interview, most of the Voronezh citizens (58%) are satisfied with this system, and they think that all the resources should be used for the Festival financing.

Opinions of the rest responders were split. 14,1% of the of the respondents think, that the Festival should be financed from the local budget and 16,9% that by the means of the private investors. And only three persons of the all interviewed thought that “it would be good to reach self-sufficiency”. Well, if assume that such is possible the Festival would have to turn down all free events and increase ticket prices three times.

Platonov Festival should stay under the Regional control or be handed over to the outside organization?

Summing up their research, the specialists of “Kvalitas” summarized that: